The two-floor extension that Studio Bright has added to this Edwardian family home in Melbourne includes fun features like a theatre-style sitting room and a pool that resembles a Roman bath.

The Edwardian-era home is perched on the peak of Ruckers Hill in Melbourne's Northcote suburb, looking out over the city.

Inside it had a conventional layout that comfortably accommodated the family's bedrooms but, despite various lean-tos that had been added to the house over the years, there was a lack of proper living space.

The inhabitants were keen to have more multifunctional rooms where they could indulge in their personal hobbies.

Locally based Studio Bright was brought on board to create a spacious extension that would allow the existing house to stand as an "unencumbered discrete entity".

"[The house] is the architectural equivalent of comfort food – the new pavilion expands the nuanced living possibilities," said the studio.

"Rooms are configured for the specialised interests of particular family members, yet each offers scope for temporal adaptations on the fly."

The extension comprises a pair of stacked white-brick volumes. On the ground level is an open-plan living area, one side of which plays host to a kitchen almost entirely lined in light-hued battens of wood.

A slab of flecked stone inlaid with peachy aggregate has been used to craft a splashback.

Inhabitants can choose to eat at the breakfast bar, which has been built into a partition wall, or at the more formal dining area that's set in the corner of the room.

It's backed by a meshed metal screen which, as night falls and lights switch-on in the house, allows passersby on the street to get shadowy glimpses of the family enjoying dinner.

The adjacent sitting room is dressed with a tan-leather sofa and a plump armchair covered in mauve-coloured velvet.

A heavy green curtain has also been hung from a track on a ceiling – this can be drawn across to turn the space into an "impromptu theatre" for performances the kids put on.

The sitting room has also been placed up on a curved plinth, lending it more of a stage-like quality.

A suspended staircase leads to the first floor, where there's a book-lined study and a secondary lounge that can serve as a guest room when necessary.

This upper volume of the extension dips inward on two sides to form a pair of decked courtyards, each bordered by planters.

The studio is hoping that fronds of greenery which will eventually spill over the edge of the courtyards will help animate the home's facade.

"The house has a two-part nature – one a personal retreat, and the other more civically engaged with an eye on the street and far horizon," added the studio. 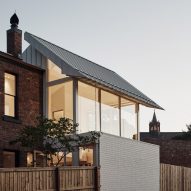 Off-form concrete fencing has also been erected around the extension, its corrugated surface a visual nod to the backyard sheds that can be seen around the surrounding neighbourhood.

A long, light-filled corridor punctuated by upside-down arched windows links the extension to the Edwardian section of the home.

Windows that face onto the garden double-up as cosy nooks where the kids can sit and relax throughout the day. Upturned arches have also been inset in the wall that flanks the home's pool, giving it the air of a "collonaded Roman bath".

In the older part of the house, the studio set out to revive original decor details – aluminium window frames have been removed, skirting boards were restored to their original shape and fireplaces were reinstated.

En-suite wash facilities have been added to each of the bedrooms, but these have purposefully been designed to stand out from the original architecture and completed with bold colour-block interiors.

Studio Bright – formerly known as Make Architecture – is based in Kew, Melbourne and is led by Melissa Bright.

This is one of several residential extensions that the studio has completed in Melbourne. Back in 2017, it added a black-and-white volume to a cottage in the city's Abbotsford neighbourhood, which curves around a secluded courtyard.

In 2015 it also built an extension for a bungalow in the St Kilda suburb, which features a gridded timber facade.