Architecture studio Atelier Vens Vanbelle has built a Corten steel guesthouse with a watchtower in Uitbergen, Belgium, for a client in the film business.

Named after its owner, Alex Guesthouse was built to meet his brief that international guests should remember their stay forever. It was constructed from different layers of laminated veneer lumber (LVL) clad in Corten.

"We had to think of something beyond other guesthouses," Atelier Vens Vanbelle founders Dries Vens and Maarten Vanbelle told Dezeen.

"It should be something you've never seen or experienced before, and guests should feel at ease during their stay. We came up with the idea of a sort of wooden cave, because wood can give you this 'cosiness'."

Designed as one large piece of furniture, the wooden part of the guesthouse was constructed in a studio and then rebuilt on site. Atelier Vens Vanbelle also built an underground extension to the existing building, which leads to the guesthouse and houses a cinema, bar, storage and bathroom.

"We started designing and came up with the idea of a big piece of furniture, in which the layered wood serves as floor, ceiling, walls and furniture all-in-one," the studio explained.

"Because the interior is quite monotone colour-wise, the attention is drawn to the big circular windows in which the garden and a castle are framed."

The architects used the brief to turn a forgotten corner of the garden into a focus point, with the aim of creating an experience rather than a building. To that point, Alex Guesthouse is initially accessed through an underground entrance.

"Alex takes visitors to their guesthouse via an unusual trail: they first enter his living room, where we've made a connection with the new garden storage and bicycle storage, which they find quite weird," said Vens and Vanbelle.

"From the bicycle storage they take the staircase which leads them underground in a long disorientating corridor," the architects explained. "At the end of this corridor you have the bar and cinema, but also the spiral staircase, which leads them to the guesthouse and watchtower." 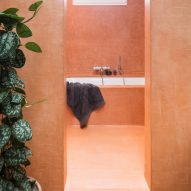 The spiral staircase is connected to the outside and culminates in the watchtower with a view of the Schelde river valley. Alex Guesthouse can also be accessed from the street and garden.

A street-facing garden wall helped the architects settle on the softly rounded, natural shape of the building.

"The underground part got covered by a green hill, so we wanted the guesthouse to be an object that seems strange at first sight but rather logic when you have a closer look," they said.

Profiled Corten steel was chosen for the cladding as the studio thought it abstract enough to fit with the interior, while its colour suits the surrounding trees and garden well.

"The volume looks abstract, without being shocking," the architects explained.

"The rust process is completed, so the corten will stay like this forever, just until it will be discovered by aliens, wondering what kind of space ship they are looking at... or something like that."

Though the building wasn't inspired by any film in particular, the architects kept the cinematic aspect of the project in mind when designing it.

"In general we like the astonishing atmospheres which are created by – for example – David Lynch or Peter Greenaway," they said.

"They create atmospheres which feel familiar and disorientating at the same time, so that's roughly what we had in mind too: to create a sequence of different experiences and atmospheres that make the visitor de-connect with daily life and focus on other things, like feelings, views, and peace."

Atelier Vens Vanbelle has previously created an L-shaped white brick house inspired by monasteries and farmhouses and built a pentagonal house around a tree trunk.