French studio Dominique Coulon & Associés has built a covered market alongside an exhibition area, workshops for creatives and a concrete cafe in a former distillery in Schiltigheim.

Dominique Coulon & Associés rejuvenated the group of four historic buildings as part of the municipality of Schiltigheim's plans to regenerate the centre of the town.

All four buildings, which were built as a distillery before having several uses and finally becoming a butchers' cooperative, had fallen into disrepair after laying empty for around a decade.

The studio restored and made alterations to the buildings to different degrees, with almost the entire internal structure of the largest building removed and replaced.

"We worked on the history of the buildings. The market-hall is the building that was most altered. It had various functions in the past: it began as a slaughterhouse, then became a distillery, before turning into a place of entertainment – first a theatre, then a venue for temporary exhibitions," he continued.

"We found some of the layers of these successive stories, mainly on the facades, which had also been transformed a number of times."

The largest building now houses a permanent fishmonger and butcher on the ground floor, along with spaces for temporary market stalls divided by a wide full-height corridor.

The upper storey contains an open exhibition space that overlooks the corridor below, along with two enclosed spaces for workshops.

A concrete cafe has been added, extending from the market building into the repaved courtyard that the four rejuvenated buildings surround.  This partially covered space forms part of the town's plan to make the space a place for residents to hang out. 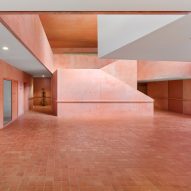 "It consisted of offering real urban porosity," explained Coulon. "Pedestrians can use the walkway to pass through the market hall, making the site a place of passage and a shortcut in the town."

"It provides a place for gatherings – a place where people can meet, and talk," he continued.

Alongside the market hall, which has been finished with grey brick and topped with a new roof, the other three timber-framed buildings were restored and converted into offices for the town's culture department.

"The smallest house was completely dismantled, something that is possible with its wooden structural frame, and rebuilt using restored parts," said Coulon.

"The other two houses were restored in a more conventional fashion, and brought up to compliance with insulation standards."

Throughout the project Dominique Coulon & Associés aimed to satisfactorily combine the contemporary and historic elements to create a coherent scheme.

"One major feature is obviously the strange relationship between the two parts of the project, since at first sight they appear totally unrelated," explained Coulon.

"Managing to combine them, binding them together, means that in the end their relationship creates unusual areas, providing the project with its singularity in terms of space as well as programme."

"Our intervention consisted of making all these transformations, including our own, legible, and that is why we have left the facades almost incomplete," he continued.

"Streaking and defects in the concrete have been left visible: what we wanted to do was leave traces of the successive histories and make it possible to glimpse the structure's poetry."

Strasbourg-based Dominique Coulon & Associés was established by Coulon in 1989. The architecture studio has previously designed a school sports centre in Strasbourg and a theatre with a bright red auditorium in the French town of Freyming-Merlebach.

Photography is by Eugeni Pons unless stated.