Over a quarter of black architects in the UK deal with racism in the workplace as discrimination becomes "widespread", a survey from the Architects' Journal has shown.

In its second race diversity survey, the Architects' Journal (AJ) found that architects from black, Asian and minority ethnic (BAME) backgrounds are experiencing more racism at work than in 2018.

Increase in architects being subjected to racism

Of the BAME architects surveyed by the AJ, 27 per cent reported being subjected to racism in the office. This is up from 24 per cent in 2018.

Yet 22 per cent of white respondents said there was "little" or no racism in the profession.

The UK architecture industry displays "ignorance of there being an issue to begin with" said another BAME respondent.

"While writing the diversity policy for the office, I heard on a number of occasions 'we don't have a problem', 'we employ on merit' and other such defensive comments."

Reports of racism on the rise

In 2020, 33 per cent of BAME respondents said racism was "widespread" in architecture, up 10 per cent from two years ago.

Black, African and Caribbean respondents reported even worse levels of discrimination, with 43 per cent reporting racism was "widely prevalent" in architecture. Only 30 per cent of this group said the same in 2018. 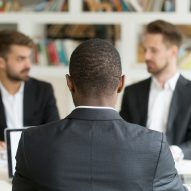 Of white respondents, 61 per cent said there was "some" racism but in the profession, but only 17 per cent recognised it as "widespread".

The AJ runs the race diversity survey in partnership with the Stephen Lawrence Charitable Trust. Stephen Lawrence was a young, black aspiring architect who was murdered in 1993 while waiting for a bus in a racially motivated killing.

In 2018, the inaugural survey mapped a landscape of BAME architects subjected to racist language in the workplace and systematic ignorance of the issue from white line managers.

"As a predominantly white profession, we recognise that we have contributed to this pain"

In one incident, a black architect was left to challenge white colleagues over their dressing up in blackface at a work event.

Black architects remain "hugely underrepresented" in the industry said the AJ, reporting under 11 per cent of architects coming from BAME backgrounds in the AJ100 2020 survey.

According to the latest UK census, almost 20 per cent of the country's population is from an ethnic minority.

Main image is from Nappy.