A century-old tree soars up through the roof of this restaurant in Beijing, which C+ Architects has decked out with rammed-earth tiles, travertine and timber.

Restaurant Ya is nestled amongst the houses, temples and office buildings of the Dafangjia Hutong in Beijing, serving up dishes inspired by the cuisine of China's Yunnan region.

It previously had nondescript white walls and paved floors, but C+ Architects wanted the new interior to better reflect the streets surrounding the restaurant, where "old and new, traditional and modern coexist".

The practice first made a focal point of the 100-year-old Jujube tree that rises up through the restaurant's roof– the base of it had been cluttered with potted plants.

It's now simply enclosed by a series of black-framed glazed panels, forming a small courtyard.

One wall of the restaurant has been clad with large bricks made from rammed earth. It's punctuated with a large opening that accommodates a drinks bar, behind which glassware is displayed on rows of open shelving.

A rough stone column has also been erected at the centre of the floor plan, while slabs of reddish travertine have been used to line a wall on the opposite side of the venue.

Other decor elements have purposefully been crafted from more contemporary materials, like blackened steel. This includes a secondary V-shaped drinks bar and the upper half of the staircase – the first few treads are made from concrete. 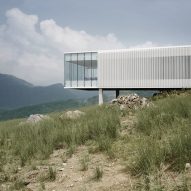 It leads to an open-air roof terrace which has been finished with a reflective water feature.

Some elements of the restaurant are informed by the Chinese character "崖" – pronounced as "ya" – which translates to cliff in English.

For example, the main dining space has been sunken below ground level to create a "vertical interaction" between the elevated courtyard and seating area at the restaurant's rear.

The space is also topped by a skylight so that, when diners glance up, "they can feel the blue sky and white clouds within easy reach".

Timber tables and jet-black dining chairs have been dotted throughout.

C+ Architects is based in Beijing's Dongcheng District, and was founded in 2014 by Cheng Yanchun and Li Nan.

This isn't the only dining space designed by the practice – in 2019 it also created Floating Island Restaurant, which cantilevers off a grassy hillside in Chongqing, China.

Photography is courtesy of Xu Xiaodong and C+ Architects.