Casa Ballena was designed for a Mexican artist who wanted to create studios and residences for local and international artists in San Jose del Cabo, a town on the southern tip of the Baja Peninsula.

The complex houses three workshops, an exhibition space, multi-use patios, dining and living halls and a warehouse. Each of the buildings is constructed with rammed-earth similar to the colour of the ground around the property.

The local studio chose the material because it is capable of creating microclimates that differ from the conditions of its given environment and for its soundproofing ability.

RIMA Design Group varied the height of the rectangular volumes in correspondence with the site's gradual incline. Gravel patios and stone pathways snake between each of the units to form separated patio spaces decorated with native vegetation such as wild grasses and cacti.

"Casa Ballena's design emanates from excavation and earthmoving, taking advantage of the topography in order to play with different heights and create a natural buffer that allows both the control and direction of the views, as well as the creation of a private and internal experience," the studio said. 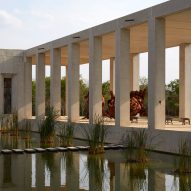 "The relationship with nature is very important to this project; the buildings concentrate on the terrain achieving an internal experience that brings privacy to artists across patios," it added.

Staggered windows span across the faces of the tan-coloured buildings, which are outlined by a thin concrete border. Concrete pathways and patios around the property are shaded by a series of pergolas with stick roofs.

The living quarters, bathroom and kitchen and administration area face south towards views of the Puerto Los Cabos marina.

Natural light filters through the ceiling of the white gallery to brighten the space and illuminate the exhibited art pieces. Three plant beds arranged in a row on the structure's roof form a rooftop garden.

The warehouse building has two levels, occupied by a parking garage and a switchyard where art and supplies can be transported to and from the workshops.

Each of the three workshops is housed in its own structure to offer space for artists to work in a variety of mediums including print, typography and paint.

A private studio for the main artist shares a building with the paint workshop. Similar to the gallery the workshops run north to south so artists design their pieces in the same conditions as the exhibition space.

The municipality of Los Cabos comprises two beach towns, Cabo San Lucas and San José del Cabo. The area is a popular tourist destination with a number of hotels such as the Nobu Hotel constructed with locally sourced stones and a resort with cascading terraces by Sordo Madaleno.

Other art centres in Mexico include Tadao Ando's Casa Wabi and a concrete colonnade Arcadio Marín designed as a studio and gallery space for his brother.

Photography is by Rafael Gamo, unless stated otherwise.