Frank Lloyd Wright's School of Architecture at Taliesin will change its name and move its campuses to the Cosanti and Arcosanti sites Italian-American architect Paolo Soleri designed in Arizona.

School dean Chris Lasch told Dezeen it was in the process of moving from Taliesin West in Scottsdale, Arizona and Taliesin in Spring Green, Wisconsin. The Cosanti residence and studios will serve as the main campus, while the experimental town Arcosanti will be an additional site.

First reported by the Architect's Newspaper, the news comes as the school severs ties with the Frank Lloyd Wright Foundation after the two failed to come to a financial agreement.

The split means the school, which Wright established in 1932, needs to leave the buildings that are owned by the foundation, and find a new name.

"Paolo Soleri's architecture can also be a valuable teaching tool"

Lasch, who is serving as interim president following the resignation of Aaron Betsky, said the Soleri-designed sites owned by the Cosanti Foundation would allow the school to continue the hands-on approach to teaching architecture that Wright established.

"Being able to find a place where we can continue our kind of immersive architectural education experience and having the space to do these experimental design, build projects on campus make these places a really good fit," he told Dezeen.

"They are kind of similar places, designed around the idea that learning and practicing architecture would happen in a hands-on way that is the foundation of the work at Taliesin and Taliesin West."

Late architect Soleri, who studied at Taliesin West, set up Cosanti on a five-acre site in the 1950s. Designated as an Arizona Historic Site, it comprises structures that he built with students including his residence, a student dormitory, outdoor studios and a performance space. Many are earth-cast, a process that involves setting concrete over earthen structures.

Soleri began work on Arcosanti in the 1970s, with the intention to explore his concept of arcology, a term he coined to merge the terms architecture and ecology.

The school will begin by using the two sites as a base for online summer classes, following a number of educational institutions that have gone virtual as part of regulations during the coronavirus pandemic. The move will be made permanent if the state of Arizona and the Higher Learning Commission approves the sites for in-person classes. 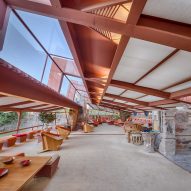 Wright, who is considered most of the most important architects from the 20th century, established the school to teach the Taliesin Fellowship apprenticeship, which allowed 50 to 60 students to study under the architect. Following his death, the school programme continued to teach with his experimental ethos.

Lasch said that the move to Cosanti and Arcosanti could offer more opportunities for students.

"Paolo Soleri's architecture can also be a valuable teaching tool, especially when it comes to methods, material experimentation and a kind of different view of urbanism that Arcosanti especially offers in a way," he said.

"In a way to Cosanti and Arcosanti are less precious than Taliesin," he added. "They are living and working sites, so there is a lot of room for experimentation."

"Moving away from the historic Wright campuses was not our choice"

The move comes in the wake of uncertainty about the future of the school, which announced it would close in January because it could not come to a financial agreement with the parent organisation. The school board then voted to keep it open after a public outcry allowed it to secure additional funding allowing it to function independently.

"Moving away from the historic Wright campuses where we've been housed the last maybe 88 years was not our choice, and certainly we would have preferred to stay there," Lasch said.

"When it became clear that the Frank Lloyd Wright Foundation was unwilling to renew our memorandum of understanding (MOU), we needed to leave Taliesin and Taliesin West but it was important to us to keep our programmes going and be able to deliver the same programme that our students have signed up for."

"We're very grateful and excited about our new collaboration with the Cosanti Foundation."

Aaron Betsky announced his resignation as president afterwards following a bitter fight to save the experimental institution. "The Frank Lloyd Wright Foundation has done its best to stymie our vision and spirit," he wrote in an Opinion for Dezeen detailing the behind-the-scenes battle to save the school.

Architect Ben Aranda, who runs firm Aranda\Lasch with Chris Lasch, was among those against anticipated closure, calling it a "tragedy", while Blair Kamin described it as an "End of an era" on Twitter.

Photo of Arcosanti is by Carwil, courtesy of Wikipedia.

More School of Architecture at Taliesin