The Amsterdam-based lighting designer, who received a Dutch Design Award in the category of Young Designer in 2015, discussed her work with Dezeen's founder and editor-in-chief Marcus Fairs.

Van Dongen's designs typically take a scientific angle, the result of a lifelong fascination with nature and science that motivated her to study biology at university.

However, she decided to change paths two years into her course and in 2010 she applied to Design Academy Eindhoven, from which she graduated in 2014.

Her ongoing research explores the uses of light as an energy source and the ways in which glass can facilitate this process.

Early last year, Van Dongen developed a robot-like sustainable light source that was powered by the excretion of electrons by micro-organisms. Called Electric Life, the project was exhibited at Paris' Centre Pompidou.

Later on in 2019, she created an installation called Mud Well, which used bacteria from a boggy World War Two bomb crater to generate kaleidoscopic light forms within a telescopic tube. 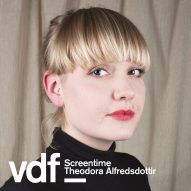 This conversation is sponsored by Philips TV & Sound and is part of our Screentime series for Virtual Design Festival, which features interviews with European designers including Theodora Alfredsdottir and Ini Archibong.