Alfredsdottir, an Icelandic product designer based in London, spoke to Dezeen's founder and editor-in-chief Marcus Fairs about her work.

The designer studied at the Iceland Academy of the Arts in her home country before coming to London, where she completed a masters in Design Products at the Royal College of Art. 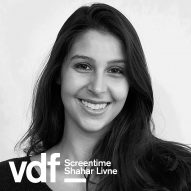 Last year, she collaborated with German designer Tino Seubert, with whom she shares a studio in London, to create a collection of modular lights made of plywood and off-the-shelf aluminium tubes. The design of the lighting fixtures is based on the techniques that went into manufacturing many of the best-known examples of mid-century furniture.

Alfredsdottir's stackable Mould side tables, which are made from ceramics using a single mould, were exhibited at last year's edition of London Design Festival.

At the 2016 instalment of the DesignMarch event held in Iceland, Alfredsdottir exhibited a dining set intended to draw attention to the properties of feldspar – the world's most abundant mineral.

This conversation is sponsored by Philips TV & Sound and is part of our Screentime series for Virtual Design Festival, which will feature interviews with European designers including Teresa van Dongen and Ini Archibong.