Architecture studio Mas-aqui has renovated a 20th-century apartment in the mountains above Barcelona, creating a light-filled home.

Called Akari House, a Japanese term for light, the home is now lit by a large skylight built into the roof terrace.

Mas-aqui's clients bought the property, which dates from the 1910s, in a state of disrepair, having already commissioned the studio to overhaul it.

The architects removed the leaky metal roof and turned it into a sunny patio with panoramic views.

The rooftop terrace now acts as top story for the apartment, punctured by the skylight that brings natural light into the floors below.

On the bottom floor there is a washroom, bedroom and a study, which can be opened out to the corridor with sliding wooden doors.

Simple concrete steps lead up to the middle floor, entering straight into the open-plan kitchen and living room.

Here, a long, low sofa sits against one wall, facing framed artwork placed on a bench-style shelf that runs all the way to the sink.

White tiles for the splashback, a white cooker and white ceiling fan blend into the white walls. Light bounces around the room from the skylight over the kitchen table.

Light also comes down the stairs through the glazed doors of the shelter covering the door to the terrace.

Separating the living area and the second bedroom is a built-in bathroom with a shower and toilet in a white-tiled room.

A small, square marble sink sits in a niche against a mirrored wall that creates an illusion of space.

Red floor tiles mark the gap between the bathroom and the bedroom, which can be closed off for privacy with another sliding wooden door.

Large glazed doors open on to a small balcony off the bedroom. 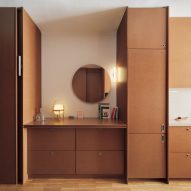 Transforming the space into something bright and airy was the core aim of the project.

"Akari is a Japanese concept that refers to the emotional power of light, to its ability to create atmospheres and spaces of well-being for people, thus stimulating our feelings and emotions," explained Mas-aqui.

Along with light, a minimalist approach was key, said the studio.

"The driving force behind the project was the idea of reducing to multiply," they added. "The forms and materials were simplified and, from simplicity, character was infused into the spaces to be able to enjoy life on three levels."

Mas-aqui is based in Barcelona and was founded by Japanese architect Masaaki Higashi and Minorcan artist Esther Mir.

Photography is by Jose Hevia.