Amsterdam studio Crafted Works has designed a timber cabin in the Netherlands, which has a structural frame that is exposed throughout its interior.

The studio designed the single-storey cabin, which is located in a holiday park near the German border in the Dutch province of Drenthe, so that its structure would become a key part of its interior.

"Structural and material expression was the main driver for the design," said founder of Crafted Works James Jeffries.

"The various building elements were considered in terms of how their structure could be exposed, rather than being concealed behind linings and claddings, helping to generate a distinct and unique character to the cabin whilst also exhibiting the work and craftsmanship involved in its construction," he told Dezeen.

Douglas fir was used to create the cabin's frame, which is supported on galvanised steel screw pile foundations, as well as the external wall studs and roof rafters.

The cabin is topped with an over-sailing corrugated steel roof.

The entire cabin was built by a team of two, with Crafted Works designing the structural components so that it could be assembled quickly and easily. 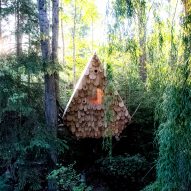 Ten remote homes to offer a little escapism during the pandemic

"Because the build team was essentially two people, we needed to choose a suitable construction and assembly method early on in the design stage to ensure construction could be realistically achieved with the limited available resources," explained Jeffries.

"The cabin was always intended to be made from wood and after reviewing various options, Douglas fir became the only viable species that could achieve the durability, price and local supply aims of the project."

The cabin has a cranked plan with the kitchen, dining and living space at the centre of the building, where the orientation shifts, and the bedrooms and bathrooms at either end.

Softwood sheathing boards have been placed on all the walls and incorporated into the inbuilt furniture to create what the studio describes as a "textured yet monotonous backdrop".

Although the studio was worried that the extensive use of timber would make the interior overwhelming, they think the finished building is a relaxing space.

"The timber surfaces soften the more time you spend in the cabin and have become much more background than we were expecting," said Jeffries.

"The warm tones and textures of the wood, along with the exposed roof rafters that also act as acoustic baffles, help create a relaxing and quiet interior environment."

The cabin was constructed by Crafted Works' sister company contractor Crafted Space, and the studio updated the design throughout construction to refine its details.

"It perhaps feels more developed than a typical timber cabin, especially with regards to the details and specification," said Jeffries.

"Because we built the cabin ourselves, we were able to review and improve on the detailing throughout the site phase without impacting on cost or programme," he continued.

"For example the window detailing allows the outer frames to be concealed both internally and externally and gives them a more streamlined appearance. Although mostly small things, we feel that cumulatively this attention to detail has had a positive impact on the final product."

Amsterdam-based Crafted Works was established in 2018 by Jeffries, who was formerly a co-founder of London studio 31/44 Architects.

Other recent cabins include a tiny off-grid structure in Upstate New York, which has walls made from infested ash wood, and a self-sufficient cabin that can be tailored to the local climate and topography in Chile.

Photography is by Maarten Willemstein.