A multidisciplinary team in Chile has designed a self-sufficient cabin that can be tailored to the local climate and topography, along with a client's specific needs.

The ZeroCabin was envisioned as a low-impact, customisable dwelling that operates without the use of public utilities.

The cabin was conceived by a diverse team of six people, who collectively have backgrounds in civil engineering, physics, biology, chemistry, sustainable farming and interior design. None of the team members have formal training in architecture.

Felipe Lüer, one of the lead designers, said the idea for the cabin took root in 2007, when he saw the documentary Garbage Warrior. The film is about the American architect Mike Reynolds and his efforts to build "earthship" houses, which are made of natural and recycled materials.

Lüer said the film sparked his dream of building an off-the-grid house, and he later found others who shared his vision.

"My team is made up of people who heard about the project and came to start building this new future," Lüer told Dezeen.

The designers have conceived the cabin as a "kit of parts" that can be customised based on a customer's needs and desires, along with the local site conditions.

The first ZeroCabin has been built within a puma sanctuary in Puerto Varas, a town in southern Chile. The building is rented out to tourists, with the proceeds going toward the wildlife preserve.

To provide views and minimise its impact on the earth, the two-storey dwelling is elevated two metres off the ground.

Encompassing 26 square metres, the cabin accommodates all of the basic living requirements. The lower level offers an area for cooking, eating and relaxing, along with a water closet.

The upper level contains a sleeping area, a closet and a shower. The bathing water travels via gravity to the lower level, where it is reused in the toilet.

The cabin's water needs are met by rainwater, which is collected in basins and treated on-site. The water can be heated by a solar panel system or by a wood-powered stove that was invented by one of the team members.

Energy needs are met by photovoltaic panels, and heat is provided by sunlight and the stove. Lüer noted that cabins in other locales might incorporate power-generating devices such as micro water turbines, depending upon the climate and topography.

A second cabin is currently being constructed on Chiloé Island, located off the coast of southern Chile.

Because the building site is not accessible by road, the team has transported all materials and equipment by boat to a beach. From there, it is carried 100 metres by foot, according to the team.

This second dwelling, which will serve as a private vacation home, will total 46 square metres. 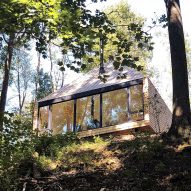 The Hut by Midland Architecture operates off-the-grid in Ohio

The designers have formed a company – called ZeroCabin – and they intend to construct additional units and retrofit existing buildings. Moreover, they are selling their "DIY kits" to customers wanting to build their own off-the-grid retreat. The starting cost for a ZeroCabin is about $50,000 (£38,455).

Other off-the-grid buildings include a simple, black cabin by designer Marc Thorpe that is tucked into the woods of Upstate New York, and a family retreat in Ohio by architect Greg Dutton that evokes the feeling of being in a tree house.

Photography is by Matias Riveros.