Random Art Space is tucked down a lane of Ming and Qing-dynasty buildings in Hangzhou's Shangcheng District.

The 150-square-metre unit was previously occupied by a furniture retailer, but Miami-based practice Air Architects has now transformed it into a gallery-cum-cafe for Chinese lifestyle brand Random.

On the ground floor is the cafe, called Ceremorning, while up on the first floor is an exhibition space called Random Play, which will showcase pieces from independent designers.

To visually create a "vertical relationship" between the two spaces, the practice has finished them both in the same colour and material palette.

"Under the relatively unified design concepts and architectural elements, the project highlights the interdependence of the two sub-brands," explained Air.

The Ceremorning cafe is anchored by a chunky concave partition that's lined with strips of Canadian oakwood. It curves around a trio of original timber pillars that the practice didn't want to disturb. 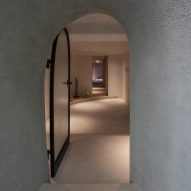 Shanghai's Single Person gallery is designed to resemble a cave

"Canadian oak was chosen as the major material as we consider it relatively more sustainable," said practice founders Xin Liu and Jie Su

"Firstly for its long term durability, and secondly, it causes less waste as most of the offcuts can be alternatively reused in smaller-scale projects,"  they told Dezeen.

Oakwood has also been used to craft the base of the main counter where customers place their orders and the low-lying cabinetry in the service area where staff prep drinks.

Upper cupboards are made from white Corian, complementing the white high-counter that runs down the centre of the space.

The extensive use of oak continues in Random Play on the first floor, where planks of the wood line the floor and slatted panels run across the ceiling.

Oak has also been employed to make a curved wall in-built with rows of shelving. Most pieces will be displayed here, but the practice still wanted to "divide and layer-up" the space.

Circle and rectangle-shaped screens have been dangled from the ceiling, while an undulating timber wall has been built at the rear of the space and mounted with additional shelves.

Pillars and roof beams have been painted jet black to match those downstairs.

At this level there is also Gallery 1 x 1, a one-square-metre area that will be dedicated to spotlighting singular design objects or artworks.

The practice also designed Random Art Space's exterior. A gridded oak framework has been erected in front of the windows and slim ribbons of oak have been used to form a wooden version of a Noren – a traditional Japanese fabric divider.

It furls up at one corner so that it appears to be blowing in the wind.

Other small but striking galleries in China include Single Person in Shanghai, which displays vintage design objects.

Its interior is meant to resemble a cave – walls are washed with earth-tone plaster, and exhibition spaces are set at a lower level so that visitors feel like they're descending from street level.

Photography is by Chen Hao unless stated otherwise.