Mork-Ulnes Architects has completed Skigard Hytte, a modern mountain cabin raised on pillars and made entirely from wood.

The cabin in Kvitfjell, Norway is the first project that architects Casper and Lexie Mork-Ulnes, who work together as Mork-Ulnes Architects, have made from the ground-up for their family.

Skigard Hytte consists of a regular grid of 45 wooden columns, clad with Skigard – these are long and narrow quarter-cut tree logs that are traditionally laid out diagonally by Norwegian farmers as fencing.

"We researched Skigard as a construction material in an effort to try to find examples of it being used as a cladding material but we came up empty handed," the architects told Dezeen.

"There was also something interesting about making a cladding out of log that was completely detached from the house – creating a log cabin skin that sits outboard of the building, where it is not the load-bearing element one is used to in conventional log construction," they added.

Its wooden columns raise the 145 square metres house one-and-a-half metres up from the ground, in order to disturb the landscape as little as possible.

"Instead of flattening the landscape with a concrete foundation, we left the earth underneath the cabin relatively untouched," the studio explained. "This allows animals to continue to pass through their former grazing trail, as well as not displacing the sites natural features such as the water, rocks, and grasses."

Local sheep and cows occasionally take shelter beneath the house, which references traditional Norwegian houses and ways of building.

"Our goal had always been to use as much wood as possible, since we really wanted a cabin that took advantage of the sensory qualities of wood and referenced Norwegian architectural heritage," the studio said.

"Norwegian culture has a very long history of wood as the main building material – harkening back to viking ships and the wooden stave churches that still stand almost 1000 years since they were constructed."

As well as cladding all surfaces in wood, the architects chose to also use natural materials for the roof, which has a grass top that is reminiscent of traditional sod roofs.

This was one of the few materials allowed for roofs by the local planning authority, and helps with heat retention in the winter and storm management in the summer.

Floor-to-ceiling windows that extend six metres in length let light into the cabin and reveal scenic mountain views. "With so much glass in the house, we almost never turn the lights on during the daytime," the architects said. 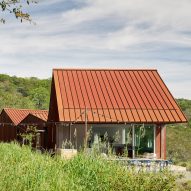 "Though the house has large glass expanses, the glass is triple-layer argon insulated glazing – and in combination with the insulated sod roof that holds snow in the winter for additional insulation and the over 8" thick insulated walls – the cabin holds the heat remarkably well despite the Nordic climate," they added.

The three-bedroom cabin also has a sauna, and an annex to offer guests a private space. Its interior walls and ceiling were constructed from pine, and the entryway from untreated heartwood pine.

The interior of the wood cabin is divided along its length into four smaller spaces, each housed under a frustum ceiling capped with a skylight.

All interior details are made of wood, including the cabinetry, custom furniture and even the shower walls and floors, toilet flush plates and refrigerator handles. Building the house for themselves enabled the architects to make those decisions.

"We were able to explore things that we have previously wanted to try but have not been able to do yet with a client – such as making the bathroom surfaces completely out of wood, and foregoing some practical considerations like stone floors at the entry to insist on having everything in the house be wood," Mork-Ulnes said.

The studio has previously designed a building clad in Corten steel to protect it from wildfires and set a timber-clad house with a "pinwheel" plan in the Norwegian forest.