Set in the historic centre of the city, the original house dates from the beginning of the 20th century. La Errería gutted the property internally and built a number of rooms from orientated strand board (OSB) in a new building set back from the house's original facade.

"We decided to keep and protect the facade in order to respect the memory and the common facade composition of the street," La Errería co-founder Luis Navarro Jover told Dezeen.

"The clients wanted a house with a radically new concept, where the luxury of the space was not in the overlapping of different floors but in the space as a great volume."

The ground floor is given over to an open plan kitchen, living room and dining area, while a freestanding timber structure conceals a bathroom.

Two outdoor terraces sit either side of the main house for the occupants to sit and enjoy the Mediterranean sunshine. A car can also be parked in the front terrace, which faces the street.

Up one flight of stairs, a single bedroom occupies a plywood gabled box with a timber external frame. One end abuts the exposed brick wall of the external structure. A peach-painted unit forms a toilet cubicle, sink and a shower.

Steps continue past the door to this room before turning the corner again and leading upwards to a double bedroom.

Also housed in its own discrete shell, Casa Mac's master bedroom is divided down the middle by a pink-walled frame that houses a toilet cubicle on one side and a shower on the other.

Round the back of the room divider is a free-standing bath tub and a built-in wardrobe spanning the width of the room.

Up a final flight of stairs a plywood-framed study nestles under the roof, slotting in under the exposed eaves. 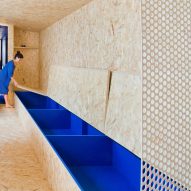 Built-in desks stretch along one side of this treehouse-style half room, which overlooks the space with a half wall.

"The materials we used were chosen for their proximity and their relationship with the place," said Navarro Jover. "For example, the stone is the original of the old building, the brick could be collected a few kilometres from the site."

Colourful accents in the form of furniture such as a red stool, a mint-green chair or a yellow table provide pops of brightness against the raw orientated strand board.

Slim black metal railings form up the stairs provide a safety measure without obstructing views across the space.

La Errería was founded in 2012 by Carlos Sánchez García, Luis Navarro Jover and has offices in Alicante, Murcia and Madrid. Previous projects from the studio include a house in Novelda divided into three angled levels.