Taiwanese studio Yuhsien has created a series of amorphous glass vessels designed to look like bubbles, which are designed to be placed over vases.

Taking design cues from the irregular and unique forms of bubbles, the playful collection of "flower hoods" was born from the idea that bubbles break when touched.

In contrast to this impermanence, studio founder Yuhsien Lin made the bubbles as solid shapes using blown glass, so they appear as if they are "frozen in time".

More specifically, the designer was inspired by a Japanese sakura raindrop cake – called mizu shingen mochi – that he ate during a trip to the country.

These desserts comprise flowers, specifically cherry blossoms, suspended inside domes of transparent jelly made of water and agar that resembles a raindrop.

According to the designer, the vase and flower hoods make way for a new form of interaction between plants and people, as they carefully place the glass cover over the vase to protect its flowers. 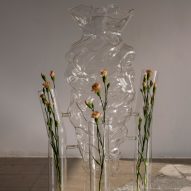 "The Bubble collection encourages the use of the hoods as a ritualistic action, making the essence of floral art more attractive through interaction with the product," the studio explained.

Each piece has been mouth-blown and hand-cut by glass craftsmen in Taiwan, China, where the studio is based.

Placed over the flower-or plant-filled vase by an opening at its base, the Bubble hoods contain enough air to maintain a level of humidity inside the dome to make its contents last longer.

Yuhsien worked with the glass craftsmen to help attaint the visual effect of a "slight swaying" motion – like a bubble wobbling in the wind, to emphasise the playful nature of the design.

The Bubble collection was first shown at Paris Design Week 2019. It was recently announced that, despite the coronavirus outbreak causing many event cancellations, the 2020 edition of the design week will go ahead from 3 to 12 September.

The Maison&Objet trade fair that coincides with the festival, however, has been postponed due to uncertainty over the pandemic, and will instead be taking place online.