Arched doorways, altar-like tables and a nave-style display area feature in this Los Angeles showroom that McLaren Excell has designed for bathroom brand The Splash Lab.

The Splash Lab's showroom takes over a converted factory in LA's Culver City area that was originally built back in the 1930s.

As this is the bathroom brand's US flagship – and currently its only standalone space – McLaren Excell set out to develop an interiors scheme that "deviates from the typical showroom format".

"The display areas needed to feel integral to the architecture of the space and not afterthoughts within an independently conceived envelope," said the practice.

The showroom's floor plan is loosely informed by the layout of a church. Visitors enter via a lobby that is meant to be similar to a narthex – an antechamber or porch-like space that sits at the entrance of churches.

At the rear is a concrete counter denoting the brand's name. Suspended overhead is a minimal light fixture made from a network of slim metal rods.

Visitors then walk through a grand vaulted doorway that looks through to a central nave. Where there would typically be rows of pews, there are two grey-plaster partitions upon which taps have been mounted for display.

Just ahead lies a huge steel table, which the practice likens to an altar. It's surrounded by jet-black stools so that customers and staff can gather for product presentations or meetings.

Chunky walls punctuated by arched openings help divide up the rest of the showroom into a series of display niches.

Some of the niches simply show-off different tap models, while others have been styled as bathroom-like set-ups with sink basins and vanity mirrors.

Each dividing wall is composed of pale grey bricks that have been bonded together using the German mortar technique of ziegel geschlämmt, where more mortar than usual is applied so that joints in the brickwork are almost imperceptible. 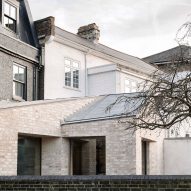 "This process blurs the unit rhythm of the bricks to create a monolithic surface." explained the practice.

"The design needed to have enough tactility to achieve the weight and presence necessary to establish this identity but without competing with the existing building fabric."

The brick walls have also been balanced on concrete plinths to "give the sense that they have always been founded on [the factory's] existing concrete floor".

A grand triple-arched partition runs along the rear of the showroom, which is meant to offer the equivalent of an apse – a recessed sanctuary with a domed roof that's typically situated at the end of a church aisle.

Behind this lies a couple of private staff meeting rooms, screened off by heavy slate-grey curtains.

McLaren Excell was established in 2010 by Luke McLaren and Robert Excell.

The London-based practice has previously converted an office into a family home, decking out its interiors with smoked-oak furnishings, and added a pale brick extension to a black-painted Victorian property.

Photography is by Jason Rueger.