Called Rethinking Materials, the final session in today's Design Museum takeover of VDF will highlight the problems around synthetic clothing, and discuss the importance of redesigning materials and production systems to create more sustainable alternatives.

Giralt will introduce a short documentary called Demystifying a Wonder Material, in which she investigates the graphene industry. Engineered in 2004, the Nobel Prize-winning, nanotechnologically produced material is a one-atom-thick layer of carbon that is extra-durable, flexible and lightweight.

The outcome of a year-long residency at the Design Museum, Giralt's project focuses on how graphene could be combined with biomaterials and natural fibres to make these materials more durable while still retaining their ability to decompose.

The screening will be followed by a series of short back-to-back interviews covering topics such as the future of material production, corporate accountability and the current process behind material innovation in the field of footwear.

Giralt will speak to Caroline Till of research agency FranklinTill, Wilson Oryema, co-founder of Regenerative Futures, a think tank focusing on how young people can instigate global change, and Angela Mathis, who is a material and innovation designer at shoe brand Birkenstock.

Giralt and Till will explore a number of measures that could be introduced alongside a circular material production system, so that waste is reduced rather than simply recycled.

"It's not just about circularity," said Till. "[It's about] how can we move towards a low material economy? We realistically need to explore de-growth to slow rates of consumption and production and to slow the commodification of nature."

"A material future is not white and shiny. It's not about high technology and smart properties," she added.

"[It's] really about looking backwards and looking at perhaps more traditional or indigenous techniques and how they can be revived and reinterpreted."

As well as talking about improving the fashion industry, Oryema will also discuss the importance of nuance in approaches to sustainability and the language surrounding it with Giralt.

"I feel like the anti-consumerist tag is a slight misnomer because at the core of everything, of existence, the primary goal is to survive, which comes about by the act of consuming," said Oryema.

"So, I would say that rather than anti-consumerism, I'm at a point where I'm against over-consumption," he said.

Mathis, who works for German shoe manufacturer Birkenstock, will offer insight into the process behind developing new materials for the footwear industry. 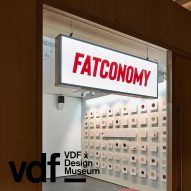 This event was produced as part of a day-long collaboration between the Design Museum and VDF. Previous events in the series include a talk about the importance of extreme environments in design by Mále Uribe, a panel discussion on design and parenthood by Stiliyana Minkovska, and Robert Johnson's Fatconomy project.

The Design Museum is the world’s leading museum devoted to contemporary architecture and design. Its mission is to make the impact of design visible through its exhibitions and collection, as well as its learning and research activities.

Designers in Residence is an annual residency programme run by the Design Museum and supported by the Arts Council of England. It provides emerging designers with time and space away from their regular environment to reflect, research and consider new ways of developing their practice. Previous residents include Asif Khan, Bethan Laura Wood, Yuri Suzuki and Legrand Jäger.

The 2020 cohort of Designers in Residence will be announced shortly.