Chilean architect Mále Uribe presents three short films and a conversation about her research on art and design's relationship with extreme landscapes in this Virtual Design Festival collaboration.

Today, the Design Museum takes over VDF for a day of content curated by its 2019 Designers in Residence – Uribe, Stiliyana Minkovska, Marta Giralt and Robert Johnson.

In this first session, titled Re-Imagining Extreme Landscapes, Uribe focuses on mineral residues and extractive processes in the Atacama desert and discusses why these extreme landscapes are important.

Uribe will screen three films that focus on the desert region of South America: The Breast Milk of the Volcano by Unknown Fields, From Here We Go Extreme by Tom Burke and Nebula, Suspended Volume by KMNCHK ScanLab.

Following the films Uribe and Kate Davies, of design research studio Unknown Fields, will discuss how art and design can work as investigative tools to explore our future relationship with extreme landscapes and ecosystems like the desert.

"I think it's really fascinating to see how, through these different ways of creating storytelling, we can have a second look at these materials, and at this territory that shape them, and unveil the narratives behind it," said Uribe, whose Design Museum residency included the creation of an architectural surface made of 1,300 tiles of salt and plaster.

Unknown Fields' film, The Breast Milk of the Volcano, was shot in the lithium evaporation ponds at the Uyuni salt flat in the Atacama. According to traditional indigenous narrative, the salt flat was created from the breast milk of a weeping volcano. 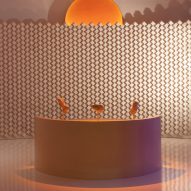 The film-makers met with local people and visited the pilot plants for the lithium production, with the aim of telling the stories of both the scientific and the mythological narrative of the Uyuni salt flat. They were also fascinated by the beauty of the landscape where lithium is being harvested.

"And I think that something about the sublimity of that landscape, even when it was being mined, was interesting to us because it was a counter narrative to the kind of visual carnage that we're used to seeing alongside environmental narratives."

From Here We Go Extreme by Tom Burke focuses on a community in the region to the south of Chile's Atacama, where pockets of land are experiencing rapid desertification.

KMNCHK ScanLab's Nebula, Suspended Volume looks at the camanchaca, the local name for the distinctive thick coastal fog in the dry northern, desert region of Chile.

The Design Museum is the world’s leading museum devoted to contemporary architecture and design. Its mission is to make the impact of design visible through its exhibitions and collection, as well as its learning and research activities.

Designers in Residence is an annual residency programme run by the Design Museum and supported by the Arts Council of England. It provides emerging designers with time and space away from their regular environment to reflect, research and consider new ways of developing their practice. Previous residents include Asif Khan, Bethan Laura Wood, Yuri Suzuki and Legrand Jäger.

The 2020 cohort of Designers in Residence will be announced shortly.