Siufan Adey and Thomas Aquilina of Afterparti present the architecture collective's manifesto in the second part of Virtual Design Festival's collaboration with the London Festival of Architecture.

Afterparti, which was born out of the New Architecture Writers (NAW) programme for emerging BAME writers, creates zines –non-commercial magazines – and events that promote underrepresented voices in architecture and design.

"We'd already disrupted the status quo in the short amount of time that we were on the NAW programme and we wanted to continue this momentum and continue changing the industry and continue fighting for equity," said Afterparti member Adey, who is also a content producer at Dezeen. "So we formed Afterparti."

For the London Festival of Architecture's series Manifestos: Architecture for a New Generation, which Dezeen is broadcasting a selection of as part of Virtual Design Festival, Adey and fellow Afterparti member Aquilina explained the work Afterparti is doing to realise the inclusive, transdisciplinary future it envisions for architecture.

"We explore big ideas on contemporary urban space through the lenses of identity and race. We want to tackle the uncomfortable subjects," Aquilina explained. "We think of ourselves, in some ways, as part of the next generation of culture-makers."

The collective launched in March 2019 and works in a number of ways to diversify the predominantly white and male architecture industry, where discrimination is widespread.

"Firstly, you can't be what you can't see," Adey said. "We do our best to be visible in predominantly white spaces in order to empower and inspire people who look like us to join in."

"Secondly, we support other BAME people and extend to them the opportunities that have been offered to us. In that way, we act as a platform. We don't believe in pulling the ladder up behind us." 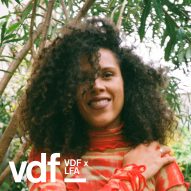 "Thirdly, we speak truth to power and do what we can to call out problems in the industry and hold people accountable. Fourthly, we invite people from disciplines outside of architecture and design to join in the conversations," she added.

The benefits of a more diverse industry are pretty obvious, Adey said. "How can the middle-class white men that make up the vast majority of the profession in the UK possibly understand the needs of people from every single walk of life?"

"They are vital voices for London"

Afterparti's events include For the Love of Power, a discussion on how to define, unpack and challenge notions of power that was part of The Architecture Foundation's Architecture on Stage series, and the Rip It Up, Again event with We Made That and Eyesore.

The collective was chosen for LFA's Manifestos series by Joseph Henry, senior project officer in the Greater London Authority in the Regeneration team.

"Afterparti contributes and provides a platform for socially intelligent and urgent ideas about our urban space," Henry said.

"Their agenda of critical thinking about race and identity has been missing in contemporary architectural discourse. They are vital voices for London."