London mayor Sadiq Khan has announced that City Hall may be relocated from its Foster + Partners-designed home alongside the Thames to the docklands area of the city as part of coronavirus cost-cutting measures.

Khan is planning to move the mayor's office and the Greater London Authority (GLA) to the WilkinsonEyre-designed The Crystal building, which is located near the Excel centre and already owned by the GLA.

Move will save £11 million a year

According to the mayor, the move will save the city around £11 million a year in rent and charges. The GLA is predicting a budget shortfall of almost £500 million over the next two years due to a dramatic decrease in business rates and council tax income.

"My first priority will always be to protect funding for frontline services, including public transport, the Met Police and the London Fire Brigade," said Khan in a statement. 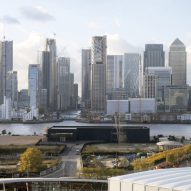 The current City Hall building was purpose-designed by Foster + Partners to house the GLA and opened in 2002. It contains an assembly chamber for the 25 elected members of the London Assembly as well as office space for the GLA's 500 staff.

Its distinctive shape is a geometrically modified sphere, which was designed to encompass the greatest volume with the least surface area. A 500-metre ramp twists up the inside of the river-facing facade.

The building is owned by St Martins Property Group and was leased to the GLA for 25 years in 2001. Khan is considering taking advantage of a break clause in the contract that would allow the GLA to leave in December 2021.

"In normal times, it would be standard practice for any mayor to consider utilising the lease break-clause on the City Hall building that becomes possible this year.

"In the current financial context, and with the looming black hole in London's public finances, it would be negligent not to do so."

The GLA will now carry out a six-week consultancy to determine whether to move to The Crystal. Opened in 2012, the WilkinsonEyre-designed building is entirely clad in glass to "challenge conventional ideas on sustainability".

It was commissioned by electronics company Siemens as an exhibition centre to demonstrate the potential of sustainable design and has been owned by the GLA since 2016.

The mayor's office believes that the relocation could boost the regeneration of the Royal Docks area in the same way that its location alongside the Thames at the beginning of the millennium helped to rejuvenate that area.

"The Crystal is a highly sustainable building on the site of London's most ambitious regeneration project, where the GLA and Newham Council are working together to create a new commercial district and visitor destination with thousands of new homes and jobs," said Khan.

Main image is by Garry Knight.