In the third and final part of Virtual Design Festival's collaboration with the London Festival of Architecture, social design and urbanism practice Migrant's Bureau reveals its manifesto for a new generation.

In its manifesto for London Festival of Architecture, Migrant's Bureau describes how it sees the next generation as multifaceted, cross-collaborative, caring, political and inclusive.

"When we first emerged, we recognised the missing link within our respective design industries that only told a single narrative and presented this as a default for all communities to adhere to," Migrant's Bureau director Alisha Fisher said.

"With our knowledge, diversity and the digital community of the Migrant's Bureau team, we are able to translate these narratives that communities can choose to relate [to], foster and create with."

The studio's past projects include design interventions, community workshops, and even supper clubs.

"After attending panel discussions and lectures, we decided we'd like a more intimate space to share knowledge and somewhere where you could do this over the process of sharing food," team member Rufus Shakespeare explained.

"It became a space of mutual aid and skill-sharing between collectives and grassroots organisations." 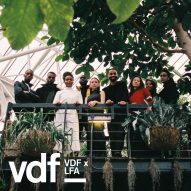 "We want to tackle the uncomfortable subjects," says Afterparti in London Festival of Architecture film at VDF

"They seek to interpret the migratory experiences of everyday life, recognising the influence that culture, geography and social circumstances have on lived experiences of the city and its architecture."