Swedish studio White Arkitekter has designed a floating pool in Bergen, Norway, which will be built as part of the redevelopment of the city's coastline into a waterfront park called True Blue.

The starfish-shaped pool, which was designed with Fredrik Pettersson Arkitekter, is set to be built as part of the creation of an almost mile-long park on the Store Lungegårdsvann lake, which is an inlet of the North Sea.

To create the park White Arkitekter will build a 1,500-metre sea wall, which will form the backbone to a series of gardens and outdoor play areas.

"True Blue is our way to express the love story between the city of Bergen and water in all its forms, the mist, the rain, the running streams and the waiting sea," explained White Arkitekter's lead architect Niels de Bruin.

"The design principle is as old as time – given the harsh conditions of the natural coast in Bergen, like the medieval builders before us, we build a wall that forms the perimeter of the park," he continued.

"The space between the wall and the sea, a series of lush hills, meadows and wetlands, become a place to experience water, the wild and dangerous water as well as the soft and soothing one."

White Arkitekter's plan divides the park into three sections that will each be programmed differently. The floating pool will form part of the first section called the Urban beach, which will be located closest to the city.

"The Urban beach is designed to be a very large, yet protected, space for gatherings, events and parties," said De Bruin.

"The sea pool, floating, in view of the urban beach, is in reality, a multifunctional platform that can be used as a stage, transforming the beach and plazas to stands for large audiences."

The sea pool, which will be connected to the mainland by a pontoon, will consist of a series of triangular volumes arranged around three geometric pools.

The triangular forms will shelter a sauna, picnic areas and kayak rental facilities.

"The triangular volumes are both elegant and functional, as they have a low centre of gravity, which makes them a prime candidate for a floating structure," he continued.

"Linking the triangulated forms together also makes a starfish pattern. The triangle-shaped silhouettes of the surrounding mountains become part of this three-dimensional landscape."

Although Bergen is situated around the same latitude as Helsinki in Finland, Saint Petersburg in Russia and Anchorage in Alaska, De Bruin believes that there is a demand in the city for beaches and that sea pools could be built even further north.

"It has become common knowledge that Scandinavians love saunas, which are used summer and winter, in conjunction with natural water, be it sea, the river or a lake," he said. 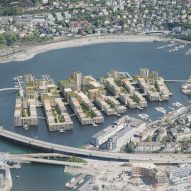 "A cold dip after a sauna is part of the Scandinavian cultural heritage. The advantage the coast of Norway offers is that the water is heated by the Gulf stream making it warm considering the latitude," he continued.

"As a result, there is a potential to build sea pools all the way up to the arctic circle! The city of Bergen has worked with improving water contact along the coast, with a series of new beaches and boardwalks."

White Arkitekter is led by CEO Alexandra Hagen, who is a judge for this year's Dezeen Awards.

At an event to celebrate the launch of awards, Hagen made a pledge that every building it designs will be carbon neutral by 2030.