Saunders Architecture has designed a wood-clad home near Bergen, Norway, with a sculptural form raised on metal stilts to capture views out over Lake Nordås.

The project, called Villa Grieg, combines a two-bedroom home with a music studio, which emerges from the ground in a low, sloping form that also houses the staircase up to the elevated living spaces.

It was commissioned by a descendant of Norwegian composer Edvard Grieg, who in the 1880s lived nearby in a villa with an adjacent composers hut, which now forms part of the Edvard Grieg Museum.

The new villa sits aligned with these historic buildings further up the hillside, taking its cues from both the programme and relationship to the landscape found in Edvard Grieg's original home.

"It's almost a longing to have the same kind of life Edvard Grieg would have had at the time," Saunders Architecture founder Todd Saunders told Dezeen.

"Programmatically it's related, as both a place to compose music and a place to live, and geographically it has the same relationship to the lake," he continued.

The plan of Villa Grieg was conceived as a continuous line that gradually moves upwards, from a more insular music studio at ground floor level into a glazed, open living space raised on piloti and framing dramatic views of the lake.

"We wanted movement, almost like drawing a single line that wraps around on itself and a sculptural movement towards the sky," Saunders said. 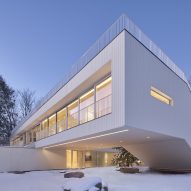 "It's about going from one level to another, but using the building to do it," he added.

The sloping roof line of the music studio gradually rises from the ground, and the whole structure is clad in Kebony timber that will slowly weather and turn grey to blend into the surroundings.

"We wanted a material that was monolithic – we do that a lot, just using one or two materials everywhere and be very strong or clear with those things," Saunders told Dezeen.

"We wanted it to blend in with the forest, and Kebony wood turns grey and takes up the patina of the natural landscape...it looks almost like a rock popping out of the landscape," he continued.

Inside, the music studio occupies a more enclosed-feeling space, with the only openings a thin skylight above the staircase and a sliding glass door at one end that provides access to a sheltered patio space underneath the first floor.

Above, an almost full-height ribbon window in the living, dining and kitchen room looks over the lake to the west, while a curved glass section looks inwards to the central courtyard and large windows in the bedrooms frame views of the landscape.

Wooden floors and white painted walls finish the minimal interiors, with a contrasting exposed concrete wall and stone island in the kitchen area.

Nearby is the site of the villa Todd Saunders designed for himself in 2015, which uses some similar motifs. The practice also made use of a similar, sloping form for the recently completed Fedje Hotel in Norway.

The photography is by Ivar Kval.