Built in a forested area near the lakeside village of Klein Köris, the single-storey house's staggered layout was determined by the existing pine trees on the site. Zelle & Moye aimed to reduce the house's impact by avoiding these trees and raising the home above the ground.

"The house hovers above the ground and intermingles with the plot's trees to minimise its impact on the surrounding nature," said Zeller & Moye co-founder Ingrid Moye.

"Thus the fragmented volumes generate external nooks along the facade," she told Dezeen.

The largest rectangular box contains the main kitchen, dining and seating area, with three flexible rooms – which are designed to be used as a bedroom, studio, workshop or guest room – and a bathroom in the other boxes.

"Each box encloses one program from the brief," said Moye, who is a judge of this year's Dezeen Awards.

"The central box works as the heart of the residence as an open room for eating, dining, and living; whereas the private functions spread out into individual cubes with views across the landscape," she continued. 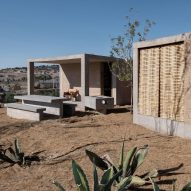 "The position of the boxes responds to the locations of the trees, creating enough distance to the plot's outline to provide privacy; and to generate a sensible distribution of the program in relation to the sun's orientation, accessibility and views."

The house was constructed entirely from timber. Its structure was made from a modular wood block system used in combination with solid wood slabs, while its exterior was uniformly clad in spruce.

"The house is entirely made out of wood: from slabs and walls to the facade cladding and wood fibre-based insulation," explained Moye.

"Since the early design phases, we had the intuition of designing this house with local and natural materials that would blend into its natural context."

Throughout all the interior spaces the timber structure has been left exposed with large windows placed to give views onto the surrounding forest.

"The raw structure is clad on the outside with locally sourced spruce but left unfinished on the inside to provide a warm atmosphere and to express the modular building method," said Moye.

Zeller & Moye is a Mexico City and Berlin-based architecture studio that was established by Ingrid Moye and Christoph Zeller in 2013. The studio has previously created a public artwork made up of samples from more than 10,000 tree species and designed a concept for modular social housing that combines concrete and adobe bricks.

Photography is by Cesar Bejar.