The "qualities of the countryside" should be introduced to urban areas to help tackle climate change, says architect Chris Precht.

Cities with buildings made from natural materials, greater space for wildlife and food production and places where people can connect with nature can help city-dwellers retain a connection with the natural world, the Austrian architect said.

"If we lose this contact with our natural surroundings, we won't be able to solve climate change and all those really big issues we face for the future," Precht said during a live interview as part of Dezeen's Virtual Design Festival.

"We need places for people to escape to"

With the drive towards smart cities and the increasing integration of technology in urban areas, there is a risk that human needs will be left behind, he argued.

"We need places for people to escape to, not just on an urban level but also in a building."

The studio is known for using natural materials such as bamboo and timber and for incorporating urban farming systems into buildings.

Precht's comments come amid a growing realisation that cities have a role to play in maintaining biodiversity and fighting climate change.

In an interview with Dezeen earlier this month, architect Winy Maas of MVRDV unveiled a concept called the Green Dip, which would see cities transformed as green havens for flora and fauna. 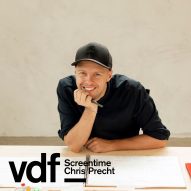 "I think it would be good to dip our planet in green," Maas said, "to somehow transform places like Hong Kong into a green dream."

In another Dezeen interview, designer Sebastian Cox pointed out that in some parts of the world, cities are becoming better custodians of wildlife than the countryside.

Describing the situation as an "inversion," Cox said humans have in some places "depleted nature in our countryside and increased nature in some of our suburban and peri-urban kind environments."

Introducing wilderness in the city

In addition, Precht believes that cities should become greener in order to help citizens' emotional wellbeing.

He suggested that cities should learn from wilderness areas by providing spaces where residents can find solitude, as reflected in the studio's recent concept for a socially distanced park.

"Having a strategy that creates buildings that people feel something about and care about may be the ultimate way of being sustainable," he said, arguing that cities have for too long been designed primarily around economic needs.

"I think we actually miss these kinds of spaces in our city," he said. "If you look at our cities, they somehow follow the economic system and they follow profitability."

"I think there is this sense of earning real gratification in what you're doing for example with your garden," he said. "You know how much effort it really takes to grow a tomato.'

These ideas are expressed in a housing concept called The Farmhouse, in which residents could grow their own food in vertical farms that follow the principles of the circular economy.

"Food waste is going to the basement where it gets decomposed and then the soil is used to grow food," he explained.

This would also give city residents the opportunity to live in closer proximity to local wildlife, as bees and birds could nest within the building's green spaces.

"We try to live as self-sufficiently as possible"

The Farmhouse project was inspired by his own family's move to the countryside and towards increased self-sufficiency – a decision that has proven especially beneficial during the coronavirus pandemic.

"We grow a lot of our food by ourselves," he explained. "We try to live as self-sufficiently as possible, which comes in very handy at times like this."

"It won't be our last pandemic," he added. "And I think it will [make] a lot of changes [to] how we perceive urban areas and also the connection to the countryside."

Precht attributes his fascination with nature to his late father Albert Precht, a famed free solo climber who refused to use bolts to secure himself to the mountain.

"If you would ask him why he actually did that, he would say because he feels alive," said Precht. "And what I think he meant by that was that he was fully connected to his senses, to his emotions, to his feelings."

"I think that architects can learn a lot from what my father went through," he added. "As a studio, we always ask: how can we create buildings that really make us feel something?"