Rewilding is a better way of fighting climate change and biodiversity loss than planting trees, according to designer Sebastian Cox.

"I'm not an enormous advocate of the planting of trees," said the English designer, who is known for his solid-wood furniture made entirely from English timber.

"I don't think it's necessary," he said. "And actually, generally, you get a much more resilient woodland if you just let it grow through a process of rewilding."

Rewilding is gaining traction as a way of letting landscapes recover with minimal human intervention. In a Dezeen panel discussion at Dutch Design Week in 2018, geologist Sjoerd Kluiving said that rewilding was the single most important way of tackling climate change.

"If we are able to rewild more in Europe, to create national parks, we can combat biodiversity lows," Kluiving said. "We can do something about climate change."

Cox, who harvests timber from his own managed woodland in Kent, England, has set a target to store 100 tonnes of carbon dioxide in his products each year and to make his business carbon negative.

He is also campaigning to double the amount of woodland and wild land in Britain by 2040.

"The thing that I find so magic about wood is that it's solid carbon dioxide," Cox said in a live interview with Dezeen conducted as part of Virtual Design Festival.

"Wood is the number one material that nature wants to give us which helps us fight biodiversity loss and climate change in one action."

Cox added: "If we were to sit down and design a material for this century – something which would be solving the issues that we face today – we would probably end up with something that looks a lot like wood."

UK imports 87 per cent of its timber

The designer, who is in the process of relocating from London to Margate in Kent, owns 4.5 acres of ancient woodland, which he manages sustainably to encourage biodiversity while harvesting timber for his workshops.

The woodland is managed actively, with mature trees cleared to allow new growth. "We're actually accidentally mimicking with our chainsaws the activity of woolly mammoths and giant herbivores that used to move around our landscape," he explained. "Woodlands respond really well to this kind of disturbance and they throw up lots of new life." 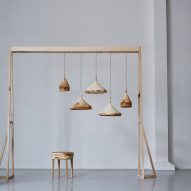 "You don't have to be a vegan to live sustainably"

The woodland only provides a fraction of the wood Cox requires, with the rest coming from sustainably managed woodlands around the UK. This makes Cox unusual since 87 per cent of the timber used in the UK is imported.

"Britain "one of the most nature-depleted countries"

Trees thrive in the temperate British climate, with a bare plot capable of producing harvestable timber within 15 years through rewilding with minimal human intervention.

But the UK has among the lowest tree cover of any comparable country, with 72 per cent of its land dedicated to agriculture. Most of this is intense, industrial farming.

"Britain is one of the most nature-depleted countries on the Earth," said Cox. "And that has a significant negative impact on our biodiversity."

In some parts of the country, built-up areas can be as much of a haven for wildlife as rural areas, he said.

"Already that inversion exists in the sense that we do have depleted nature in our countryside and increased nature in some of our suburban and peri-urban kind environments," he said.

People who criticise the destruction of the Amazon to create farmland need to be aware that the same thing happened in England in the past. "I think that we should really get our own backyard in order before we go criticising the rest of the world," he said. 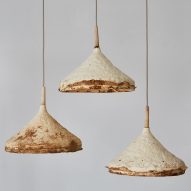 He is also experimenting with mycelium, creating a range of lights from the fungus material, and has produced a range of products called Underwood, made from coppiced wood that is usually regarded as waste.

"We're a nation of gardeners and I think we've overdone it"

Cox's approach to land management is closely aligned with that of author Isabella Tree whose 2018 book, Wilding, documents how a 3,500-acre farm in West Sussex was handed back to nature.

In an opinion column for Dezeen last year, Cox argued against calls for mass adoption of veganism to save the planet, arguing that livestock that is allowed to roam freely in natural landscapes can help rather than damage biodiversity.

He recently published a manifesto called Modern Life from Wilder Land, setting out an alternative view of how the landscape could be managed to benefit nature and fight climate change while providing valuable resources including timber.

"We're a nation of gardeners and I think we've overdone it," he said of the English tendency to make everything neat and tidy.

"One of the main things [the manifesto] advocated is the idea that we need a bit more scrappiness and a little bit more where we just let go."