The performance for Virtual Design Festival is the second part of Heap's collaboration with VDF, following a live interview with the Grammy-winning artist and a screening of a new homemade music video.

During the stream, Heap will sing and play the piano while using the Mi.Mu gloves she developed to control aspects of the music.

Dezeen made a Webby Award-winning film about the gloves in 2014, in which Heap demonstrates how they let musicians create and control music software using hand gestures.

The gloves were created to allow electronic musicians to generate music in an expressive manner instead of using their laptops, pressing buttons and twiddling dials.

Heap will also use collaborative music app Endless during the stream, which allows her to jam with other musicians around the world. 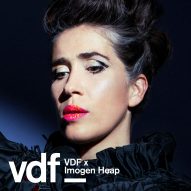 The performance marks the last day of VDF, which has been running since 15 April and is sponsored by bathroom and kitchen manufacturer Grohe.

Dezeen devised VDF as the first entirely online design festival in response to the coronavirus pandemic. It has brought the architecture and design world together to celebrate the culture and commerce of our industry, exploring how it can adapt and respond to extraordinary circumstances.

In the last week Dezeen has been rounding up the best content featured during VDF such as the best brand collaborations, the best products launched in the online products fair and the most-watched videos.