Hotel Le Sud is situated in Juan Les Pins, a charming town on the Côte d'Azur recognised for its sandy beaches and seafront promenades lined with eateries and boutiques.

This setting became a key point of reference for Paris-based interior architect Stéphanie Lizée, who was tasked with designing the hotel's 29 guest rooms, bar and terrace.

"I am native to the region, southern blood runs in my veins," Lizée told Dezeen.

"We have revisited the stylistic codes of the south with subtlety: the sandstone, the terracotta, the stripes, the rattan, interact with objects found in the surroundings and custom-designed furniture, mostly made by local craftsmen," she continued.

"The spirit of the South is here both revisited and modernized, without ostentation or caricature."

Paved flooring inlaid with jagged offcuts of stone has been paired with white-painted walls in the hotel's bar.

Wicker chairs run down one side of the room, while on the other is a series of ornate wire-frame seats dressed with floral yellow seat cushions.

A stripey orange seating banquette has been set against one peripheral wall, where French artist Franck Lebraly has created a small mural.

It depicts a trio of arched windows looking out across the ocean, with summer-themed paraphernalia like lemons, wine bottles and plant pots nestled on their ledges. 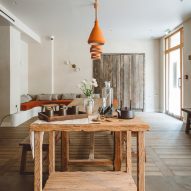 Other surfaces in the bar have been punctuated with rounded niches which display an array of second-hand ceramics found in the local area.

Stripey and cane furnishings appear again on the hotel's outdoor terrace, where guests can sit and enjoy their breakfasts.

A pair of chunky, orange-striped chairs also feature in the lobby, which is anchored by a grooved timber concierge counter.

The colours applied in the guest rooms upstairs take cues from the wider cultural context of southern France.

"The series of plates exhibited at the Picasso museum in Antibes guided me in choosing and matching the colours of the rooms – terracotta, Klein blue, pine green, yellow," explained Lizée.

"The spirits of Pablo Picasso, Fernand Léger, Jean Cocteau, Matisse and the ceramists of Vallauris are still very much present in this radiant and amazing part of the country, which has so inspired grand artists in the mid 20th century."

Bands of yellow, orange, emerald and pine-green paint have been created just beneath the rooms' ceilings, matching the stripey throws that have been laid across the beds.

Terracotta tiles have then been used to line the vaulted doorways that lead through to the rooms' showers, which are screened off by blue-striped curtains.

Paint-splattered or fish-print plates have been used as decor, as well as earth-toned vases. Some of the pieces in the rooms were designed by Lizée herself, including the wavy-edged wooden side tables.

More illustrative details by Franck Lebraly also pop up – streaks of paint have been applied around the curvy headboards and the signs that denote room numbers have also been hand-painted.

Stéphanie Lizée set up her eponymous studio in 2017. Her Hotel Le Sud project joins a roster of design-focused hotels across France – others include Hoy, which is designed to be a calming "hideaway" from the hustle and bustle of Paris' city streets, and Le Coucou, a ski-in-ski-out hotel nestled amongst the snow-capped peaks of Meribel.