Le Coucou is a 55-room hotel nestled amongst the snow-capped peaks of Meribel, a popular resort that forms part of Les Trois Vallées – the largest ski area in the world.

The hotel's staggering mountainous surroundings became a "natural focal point" for Paris and New York-based designer Pierre Yovanovitch, who was tasked with developing the interiors of the property.

"It was my first time designing a hotel of this scale and grandeur, and it was such an exciting challenge," Yovanovitch told Dezeen.

"We designed the space to offer as many views of the stunning landscape as possible."

Guests access the mountainside hotel via a lobby lined with pine wood sourced from nearby forests.

The space is topped by a domed ceiling, across which is a nature-themed fresco by artist Matthieu Cosse that depicts owls soaring across mountain ridges and nesting amongst gnarled trees.

While the smaller rooms feature Yovanovitch's sheepskin-upholstered Bear chairs – which boast cute, ear-like protrusions from the backrests – larger suites have been completed with curved velvet sofas where guests can enjoy breakfast or drinks.

Should guests want to go for a swim instead of hitting the slopes, they can head to the hotel's indoor pool. Around the periphery of the room runs a series of arched niches that tuck away loungers and side tables.

Apres-ski can alternatively be spent in the on-site spa, cigar room, or heated outdoor pool that offers up-close views of the snowy summits.

An abundance of relaxing lounge areas are also available, each dressed with bespoke furnishings and floor coverings. A selection of over 160 artworks personally curated by Yovanovitch has been dotted around as decor. 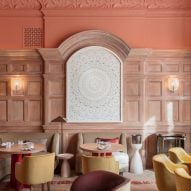 "Contemporary art is such a central focus of my design work and this project was no exception," added Yovanovitch.

"I wanted the hotel, despite how large it is, to inspire people while also feeling as unique as someone's own home."

Serving up a selection of rare meats, the hotel's Beefbar restaurant has been finished with cherry-red seating banquettes and dining tables inlaid with patterned tiles.

Winking at the hotel's name, Yovanovitch has mounted an array of unusual cuckoo clocks – a timepiece that marks every hour with the sound of a cuckoo bird – across the space's walls.

There is also a secondary restaurant called Bianca Neve, which will offer Italian dishes.

Photography is by Jérôme Galland.