Italian architect Arturo Tedeschi has designed a tram concept for the city of Milan called Passerella, which is equipped with discreet social distancing solutions.

Designed as a modern take on the classic ATM Class 1500 tram, which was first introduced to the city in 1929, the Passerella reinterprets the style and proportions of the first model numbered 1503.

Along with updating its form, Tedeschi added technologies and adaptations for life following the coronavirus pandemic. Its interior features plexiglass shields to separate individual seats and circle-shaped markers on the floor to act as discreet signals of where travellers should stand to keep a safe distance.

"The tram is certainly the most loved symbol of Milan's public transportation, with particular reference to the iconic 1503 model," said the designer.

"The social distancing measures adopted by the city – one of worst hit by Italy's Covid-19 pandemic – are changing citizens' habits and the way they live and perceive public transportation."

Tedeschi wanted to give the standard social distancing warnings that have appeared in many cities, including Milan, a more "friendly" design.

"These days it is common to see placeholder-stickers with warnings like 'don't sit here' or 'keep one metres distance'," he said. "But we don't have to forget that Milano is the capital of design, and won't easily adapt to trivial and poor solutions."

"Maintaining a one-metre distance basically means to have a virtual circle of one metre around people, so why not make a real one?" he asked. "The corridor's pavement integrates circles that both generate a graphic pattern and a distance reminder."

The interior has been conceived as a fashion catwalk, or "passerella" in Italian – laid out like an open corridor with rows of seats lining each side.

This runway-style passage is surrounded by "high-end" materials such as gilded, arc-shaped edgings on the plexiglass dividers, which match the circle markings on the floor and stand out against the interior's black base.

"I used freeform geometries and materials in order to create a scenography more than a vehicle interior," Tedeschi told Dezeen. "Fashion is Milano's DNA."

"The city is rooted in fashion design," he continued. "Fashion was the antidote in the early 1980s when the city overcame one of the darkest moments of its history – the so-called Years of Lead, which saw a decade of political turmoil in Italy."

"As a reaction to that period, in the 80s, the city flourished and changed, which was also thanks to the fashion and design industries. Brands like Armani and Versace were born in those years."

"I think fashion can be also an antidote in this post-Covid moment," Tedeschi added.

The yellow and black colour-scheme has also been extended to the tram exterior, which features an electronic display running along both sides that informs people of the next stops on its journey.

The vehicle's roof, which according to the designer, is usually a "leftover area" filled with the technical elements – has also been given this simple, striped aesthetic, so that it looks appealing when seen from people's balconies.

These stripes reference the Italian artistic and social Futurism movement, which was rooted in ideas of speed, technology and transportation.

Tedeschi said his main aim was to disguise the social distancing warnings with graphic patterns in order to offer a design-led interior without ignoring the need to maintain Covid-19 guidelines.

This way, when the distancing is no longer necessary, the plexiglass shields can be removed without making the design of the rest of the tram look out of place.

The updated design retains the same dimensions as the original ATM Class 1500 model, but features improved accessibility, ridding of the steps by making the tram's floor the same height as the waiting platform.

"I avoided the temptation to pursue an unconventional and futuristic design, and instead merged traditional elements and proportions with innovative details – just like in fashion design," said Tedeschi.

"An element of modernity can be found in the surface modelling, which mixes smooth and edgy transitions as seen in recent automotive trends, like Tesla or Audi for example." 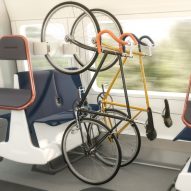 Many other designed pivoted towards making public transportation more accessible in light of the coronavirus pandemic, including electric vehicle brand Arrival, which launched a zero-emissions bus with social distancing features like zero-contact bells and removable seats.

PriestmanGoode also redesigned its Island Bay train seating to make it easier for London commuters to social distance, while Biomega founder Jens Martin Skibsted created a concept for convoys of electric driverless vehicles that would transport goods and patients around cities in isolation pods.