Ponti Design Studio has created a concept for an autonomous, double-decker tram with a radial interior design to encourage Hong Kong residents to safely return to public transport after the height of the coronavirus pandemic.

The product-design firm – founded by Hong Kong-based, Italian-born designer Andrea Ponti – wanted to offer a modern take on existing public transport to better suit it to a post-Covid-19 world, where prevention of future pandemics is key.

"This is especially important in the densely populated city of Hong Kong, where social distancing is hard to achieve," said Ponti.

The electric tram concept, called Island, aims to persuade people to move from private forms of transportation to public ones, which have become less favoured in light of the coronavirus outbreak.

By incorporating electric and driverless technology – negating the space needed for an engine and driver – there is more space in the interior of the tram, making it easier for passengers to social distance.

Passengers would sit in a radial pattern on "islands" positioned along the centre of each floor inside the vehicle, facing outwards in order to avoid breathing in the direction of other travellers.

Bar-like wooden counters line the perimeter of each storey, and feature handrails to enable passengers to stand and enjoy the passing views while travelling.

The wooden accents and warm tones incorporated in the interior provide a marked contrast to the monochrome exterior, which takes design cues from the Hong Kong cityscape.

Wrapped in large expanses of glass that round off at the front and back of the vehicle, the tram echoes the design of the surrounding urban architecture.

This use of glass allows an abundance of natural light to fill the interiors throughout the day, both via the walls and the domed ceiling.

Vertical strips of LED lights line either side of the tram's curved front and back, acting as the vehicle's brake and headlights to enhance its visibility in all weather conditions.

Ponti has also designed accompanying tram stops, which are open on both sides to encourage better air-flow and more orderly movement of travellers.

Each tram features a retractable connection point to enable swift charging at the tram stops.

Trip payments would be made contactlessly via Hong Kong's Octopus card system at these stops before boarding the vehicle. Passengers would be guided by electronic graphics informing them of how to pay.

Ridding the vehicle itself of payment points also creates more available space in the interior.

"Island represents the forward-thinking spirit of Hong Kong, and introduces a new concept of public transport that overcomes the practice of social distancing," said Ponti.

"The idea of designing a tram is no coincidence: trams are one of the city's landmarks and the tramways celebrate their 115th anniversary this year." 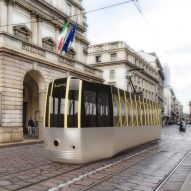 "The concept of social distancing, which limits people's freedom to move and interact, became the design challenge and focal point for the new concept," the designer continued.

"We shouldn't be dividing and separating but instead rethinking public spaces with a seamless, integrated and effective design approach."

Ponti founded Ponti Design Studio in 2013 upon moving to Hong Kong, where he has served internships with leading Japanese transport firms including Honda and Mitsubishi.

Fellow Italian designer Arturo Tedeschi created a similar concept for a tram for the city of Milan, which features various social distancing solutions including a "runway"-like interior.

The design, called Passerella, is a modern take on the classic ATM Class 1500 tram, and boasts plexiglass shields in between seats and circle-shaped markers on the floor.