Billie Buoy occupies a corner plot in Melbourne's Essendon neighbourhood and has been designed by local studio Biasol as a "1980s character who was radical, hip and a little offbeat".

To capture the mood of the 1980s, the studio closely studied the era and its quirky pop culture.

"We looked back to the days before the internet and cell phones – we dusted off our Atari and Walkman, put a John Hughes movie in the VHS, and jammed to New Order and Madonna," said the studio.

"The interiors and branding were developed in unison to create high impact and strengthen Billie Buoy's appeal."

When it came to creating a colour palette for the 60-square-metre restaurant, the studio selected two shades that it felt were synonymous with the 1980s – blue and hot pink.

Where possible, different textures and materials have been introduced to foster a greater sense of "depth, richness and variation".

Midnight-blue paint covers the walls and ceiling. The same hue of felt has been used to upholster the seating banquette that curves around the wall of the entryway and the accompanying stools.

A mixture of navy and speckled black bricks have then been laid across the floor, while white-terrazzo dining tables inlaid with blue flecks of aggregate have been dotted throughout the dining rooms.

A glossy, powder-blue service counter that features a bold scallop pattern has also been erected in front of the drinks bar.

Vibrant hot-pink details come in the form of the coffee grinders and a neon text sign on the wall. A series of vaulted steel storage shelves also appear throughout the restaurant, two behind the bar and three in the entrance dining area which are used to openly display crockery.

Doorways that lead through to the customer bathrooms and back-of-house facilities for staff are also arched in form. 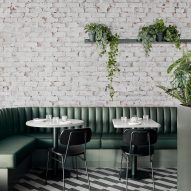 One street-facing wall is emblazoned with the words "wake me up when I'm famous", which the studio hopes will become a prime spot to snap photos for Instagram.

Biasol was founded in 2012 by Jean-Pierre Biasol and works out of offices in Melbourne's Cremorne suburb.

Billie Buoy is one of several eateries that the studio has designed around the city of Melbourne. Others include Main Street cafe, which is decked out with monochrome tiles and deep-green furnishings, and Pentolina, a pasta bar with worn concrete walls which are meant to emulate the streets of Ancient Rome.

Photography is by Timothy Kaye.