The 22-square-metre timber cabin was designed by A6A for the studio's co-founder Michel Hardoin as a small house that could be taken anywhere.

It was named Heva, which stands for "Habiter un espace de vie autonome" and translates into English as "live in a self-sufficient living space".

The cabin was built in the studio before being transported to its current location by truck and lifted onto the site using fasteners on the roof that have been anchored in the structure.

The cabin was installed on the ground using large screws that are able to hold its entire weight.

"We thought of it as a weekend house where you can go as a family; it has two double beds, an open living place with a small kitchen, tiny shower and technical storage," Hardoin told Dezeen.

"The very important thing is that it has to be self-sufficient to be efficient out of the grid and very open to nature with big sliding hidden windows."

The cabin was made from a timber frame of responsibly sourced local plywood from Landes and spruce from Limousin, with insulation made from wood fibre.

Its exterior was clad in Douglas fir boards that have been burnt to protect it against both insects and adverse weather conditions, while its deep black hue references the traditional cabins of the local woodsmen.

A6A divided the cabin into three separate spaces. The central living area has a built-in kitchen with a small stove and sink, with the bathroom placed on one side.

On the other side, there is a sleeping area with two bunk beds – one accessible from the living room and the other in a separate small room. 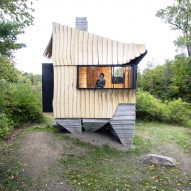 Large sliding windows open out onto a wooden deck to enlarge the living space with views of the surrounding orchard.

Large windows on both sides of the cabin let light into the wood-clad interior.

The cabin contains a wood stove for heating, while photovoltaic panels on the roof have been installed to orient towards the sun and supply the cabin's electricity.

A dry toilet was installed in the toilet and an integrated micro wastewater treatment system is used to process wastewater, though drinking water comes from a tank that has to be refilled.

"In France, the legislation is very strict with the source of drinking water, there are rainwater recovery systems to treat and make them clean, but they are not certified by the government," Hardoin said.

A6A, which stands for Atelier 6 Architecture, was founded in 2013 and is lead by Hardoin as well as Roberto de Uña and Antoine Ragonneau.

Since constructing the first cabin in 2018, A6A and wood construction company My Little Loft have begun producing and selling Hevas in a selection of sizes and configurations.

Other cabins designed for off-grid living include Maguire + Devin's minimalist retreat on Bruny Island and Hannah's Ashen Cabin with an exterior made from infested ash wood.

Photography is by Agnès Clotis.