The UK government's planning reform proposals, which were revealed yesterday, will fail to address the root causes of England's housing crisis according to architects and critics.

The government's Planning for the Future white paper, which aims to reform the planning system, prioritises the interests of developers over the building of good-quality, affordable housing, architects told Dezeen.

"The government are proposing to hand volume housebuilders the right to build whatever they want," warned architect Charles Holland. "This is unlikely to be either beautiful or affordable."

"While there's no doubt the planning system needs reform, these shameful proposals do almost nothing to guarantee the delivery of affordable, well-designed and sustainable homes," said RIBA president Alan Jones.

In the Planning for the Future report, the government laid out proposals for ways to fast-track schemes that conform to pre-set beauty standards or will be built in areas earmarked for development.

Prime minister Boris Johnson called the proposals "radical reform unlike anything we have seen since the second world war". The current planning system was created in 1947.

But the proposals are an attempt to "destroy" the planning system, according to Dezeen columnist Owen Hatherley, who noted that while affordable housing was a focus of the white paper, the question of social housing was conspicuously absent.

"Since 2010, the government has had only one idea for planning," he said. "To attempt to at once destroy it and social housing along with it, while also preserving the pickled villages and protected landscapes that make up the Tory base."

Co-founder of architecture firm dRMM Sadie Morgan called on the industry to "make the best of the reforms proposed" but agreed that there "are aspects in the reforms that are of concern", especially relating to social housing.

"The target for carbon-neutral homes by 2050 is too slow and design codes are only ever as good as the client and architect who interpret them,".

"But I do welcome the commitment to good design; the involvement of local people in the planning process as early as possible; and the recognition of local services through a hopefully non-negotiable infrastructure levy," added Morgan, who was given an OBE for services to the advocacy of design in the built environment.

The report aims to tackle the housing crisis afflicting the UK, with an estimated 8.4 million people living in unaffordable or insecure houses according to the National Housing Federation. 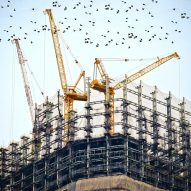 The plans would turn the existing community infrastructure levy into a single tax based on floor space that would be paid by the developer to the local authority upon occupation. A discount would be available for including affordable homes in developments.

"While the government has identified a lack of affordable housing as a major problem, this isn't an effective plan to deal with it," Holland told Dezeen.

"The white paper blames the planning process for delays and blocks to housing development and therefore proposes deregulation as the answer," he added.

"The housing crisis is really about structural inequalities between different areas of the UK. What we should be doing is addressing how to create jobs and places to live across the country as a whole."

"Marginalisation of architects here is shocking"

The proposals also marginalise the opinion of architects, according to Holland.

"It is also very noticeable how absent architects and architecture is from government thinking," he said.  "If you want to increase the quality of housing design in the UK then the marginalisation of architects here is shocking."

RIBA president Jones agreed that the proposals missed the point, warning the changes could "lead to the creation of the next generation of slum housing".

"The housing crisis isn't just about numbers, and deregulation won't solve it," he said.

"If the government is serious about addressing the dominant position of large housebuilders and the lack of quality social housing, the secretary of state needs to make changes to the tax system, look at why land approved for development lies untouched for years, and give local authorities power and resource to promote and safeguard quality."

The architecture community responded with similar energy last year when the government announced its commission into improving design quality. The Building Better, Building Beautiful final report eventually recommended the fast-track for beauty included in the Planning for the Future document.