Architect Caro Lundin took a less-is-more approach for the creation of ARC Club, a fuss-free co-working space in east London for those struggling to work from home during the coronavirus pandemic.

It took just six weeks for Lundin and her self-titled studio to complete ARC Club, which takes over a formerly characterless retail unit in the neighbourhood of Homerton.

The co-working space is meant to cater to the growing number of individuals who, according to surveys observed by Lundin, are finding it tricky to efficiently do their job from home during the pandemic due to lack of proper workspaces.

Its "starkly beautiful" interiors have been decked out with a selection of low-cost and durable materials that Lundin felt reflected a climate where co-working is "a necessity and not a nice-to-have".

Designing a more modest space also meant that membership would be cheaper for those interested in working at ARC Club according to the architect.

"Intricate details and indoor gardens are fun, but they come with a big price tag – and they're a lot harder to keep clean," said Lundin, who founded ARC Club alongside Hannah Philp.

"When designing ARC Club, I asked myself 'what do people need to work?' A comfortable seat, natural light, thoughtful acoustics; the physical and emotional space in which to think," she told Dezeen.

"Functional doesn't have to be boring, it's a neutral space that enables the people who visit it to be their best professional selves."

At the centre of ARC Club, which measures just over 232 square metres, are a pair of boxy, sound-proofed pods crafted from birch plywood.

Inside, they accommodate a handful of private meeting rooms, storage cupboards, printers and a kitchenette complete with silver-metal cabinetry.

Lundin chose to house these services inside a pod-style system so that it can be scaled up or down to suit different-sized branches of ARC Club that open in the future.

The pods are surrounded by various work areas. A few of the furnishings, like the birch-ply tables with the arched legs, were made by Lundin's studio while some of the chairs were sourced second hand. 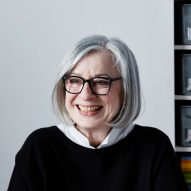 Pops of colour have been introduced to brighten up the space. Heavy orange curtains are used as room dividers, blue cone-shaped pendant lights have been suspended from the ceiling and bands of yellow paint have been made on the concrete structural columns.

Further branches of ARC Club co-working spaces are planned to open in 2021.

Like the Homerton location, they will occupy vacant high-street commercial units in popular residential areas so that members can do what Lundin has monikered "WNH" – work near home.

"A neighbourhood workplace like ARC Club allows people to retain the best of what the office has to offer – full functionality, work-life separation and human interaction – without having to get on a bus or a train," Lundin explained.

"In essence, it's an accessible flexible option for a new breed of remote worker who has grown used to scheduling their work around their day, instead of the other way."

The global coronavirus crisis has forced many to re-think offices and the way in which we work.

Interior designer Sevil Peach predicts that, post-pandemic, companies will scrap working in corporate towers and instead opt to have central "hubs" where just a small per cent of staff will gather.

Architecture practice Weston Williamson + Partners also released a series of graphics that illustrated how businesses could create socially-distanced offices. Tips included wrapping screens around desks, having touch-free doors and employing a cook so that employees don't have to use a shared kitchen.