Large offices will become a thing of the past according to interior designer Sevil Peach, who predicts that corporate towers will be replaced by smaller hubs as staff work from home offices and co-working spaces as a result of coronavirus.

Companies will maintain smaller offices as central "hubs" while large company headquarters in tall buildings are "just going to go", the designer predicted.

"What is likely to happen is that the offices are going to get much smaller inside," said Peach, cofounder of London architecture and interiors studio SevilPeach.

"There's going to be more home working, or working away from the office."

"That could be in a co-working place, for example, for people who cannot work from home because not every home is suitable for working," she added. "You may have four children running around and you may not have enough rooms."

Crowded offices that make social distancing difficult could hamper efforts to contain the virus as countries attempt to return to normal after lockdown.

"There's going to be more flexible working," said Peach. "So people could work locally from wherever they are, whether it's from a cafe or from a co-working place."

Peach, who was both a judge and a winner at Dezeen Awards 2019, made the comments during a live conversation with other judges and winners held as part of Virtual Design Festival last week. 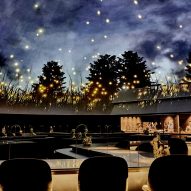 Employees will visit office hubs for face-to-face meetings and to carry out work that cannot be done remotely, Peach said during the live conversation, which also involved architect Arthur Mamou-Mani, designer Adam Nathaniel Furman and gallerist Talenia Phua Gajardo, all of whom are judges for Dezeen Awards 2020.

"But we'll be also coming to a central hub, which will be the smaller office of the companies," she said. "I think the nature of 23-storey-high offices is just going to go. We are going to get much smaller, I think."

Social distancing will have long-term impact

Peach's comments come as architects and designers attempt to divine the long-term impact the pandemic, and the potential need for ongoing social distancing rules, will have on their work. 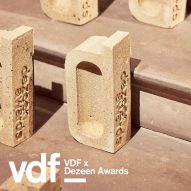 SevilPeach was named Interior designer of the year at Dezeen Awards 2019. "SevilPeach's work is intelligent and skilfully put together," said the judges. "It designs peaceful, calming spaces that appear effortless."

"The animated interiors play with light, acoustics and moments of colour."

Projects by SevilPeach include the headquarters for Finnish furniture brand Artek, and the conversion of a London house once owned by a Victorian illustrator.

The deadline for entries to Dezeen Awards 2020 is 2 June.