Sheets of paper are layered with glue and then moulded by hand to create London designer Ying Chang's Malleable State collection of furniture and homeware.

The series is continually expanding and so far includes a number of shelves, mirrors and waterproof vases, as well as structural tables and stools.

"I chose paper as my medium because it is one of the most commonly used and discarded materials," Chang told Dezeen.

"By applying a craft approach to paper, I was able to explore and expand its charismatic limits. The results reflect and play on our perception of value."

Much like with papier-mache, the wet amalgam of glue and paper becomes a malleable, clay-like composite, which can be shaped into various organic forms.

But rather than mashing smaller pieces of paper together to create a pulp, Chang's technique sees large sheets left intact and stacked on top of each other to create a smooth surface.

The silhouettes of the pieces respond to paper's unique texture. Chang's furniture often features crumpled details, as in the base of the mirrors or the carefully folded strips that make up the frame of the stools. 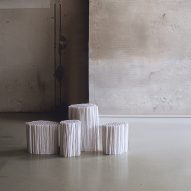 Once dried, Chang claims the strength of the material can rival that of wood.

"One piece of paper has limited strength. However, like many other materials, it becomes stronger if bonded together 20 or 30 times," said the designer.

When she first started working with this technique, Chang primarily used brown paper in a shade similar to that of cardboard, in order to let the material itself shine.

But since then she has introduced a rainbow of different colours as well as digitally printed patterns into the mix.

"The aim is to use the objects to pose a question about what our expectations are of different materials and their affective value," said Chang.

"To make us reassess the way we value things, which heavily depends on their materiality and the context in which we come across them, from the museum to the domestic."

Part of the Malleable State collection is currently on display in the Kleureyck: Van Eyck's Colours in Design exhibition at the Design Museum Gent.

Previously, Chang has developed a modular table based on the grid system used by architects and graphic designers, which was showcased in her Royal College of Art graduate show in 2014.

Other experiments in crafting furniture using paper include a duo of tables by Charlotte Jonckheer, which is made from stone dust and recycled paper, as well as Thomas Barger's cartoonish paper pulp chairs.