Candy Cubicle is a desk by Sabine Marcelis, created as part of the Design Museum's Connected project at London Design Festival, that hides its contents inside a pale wooden shell when they are not in use.

The wooden box sits on hidden wheels and can be opened along a central axis, transforming it from a block into an L-shaped desk setup.

This offers storage for books and documents on one side and space for a computer on the other.

Marcelis created the piece in response to a brief by the Design Museum and the American Hardwood Export Council (AHEC), which called for nine international designers to develop a wooden desk and chair set up to suit their "new ways of working from and living at home" during lockdown.

Candy Cubicle was designed not for Marcelis herself but for her partner, an architect with whom she shares a loft together with their newborn baby.

"He has a big screen, which has taken over our dining table for the past month," said Marcelis.

"It's super annoying – it's always there, it's ugly. I just want to be able to hide it. The desk is something that can be transformed from working mode and then back into hiding mode. It means we won’t constantly be confronted with work equipment."

The entire desk, as well as the drawer trolley and matching cylindrical stool nestled within it, are set on wheels so that they can be easily closed and moved around the loft's open floorplan.

From the outside, the wooden desk is finished in a muted white colour while the entire interior is covered in a high gloss yellow varnish.

The yellow a references a scene from the movie Pulp Fiction, in which John Travolta's character peers into a briefcase but all the audience can see is a tantalising golden glow emanating from within.

"It makes you wonder: what on earth is inside? I was keen to achieve that sense in this project – a minimal shape that beautifully shows the wood but then there's something inside it that's to be discovered," she said.

"The object we’ve come up with has two states: the closed, anonymous object mode, then it opens up and the inside is completely contrasted to the outside."

Like all of the designs in the Connected project, it was realised by the British furniture maker Benchmark with whom she was only allowed to communicate via the internet.

Another challenge lay in the material itself. Generally, Marcelis works with things such as resin, as in her Fendi fountains, the plaid Burberry displays and Candy Cubicle's see-through wheels.

But in this case, almost the entire piece is made from maple wood, which Marcelis chose for its distinctive grain. 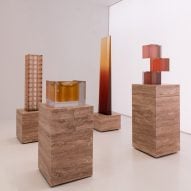 "Over the years I've tended to have a preference for things like glass and cast resins, which are materials where you can play with transparency, the interaction with light and reflection," she said.

"Those sorts of properties aren't the first things you think about when you consider timber. So, I thought it was an interesting challenge to work with such a different material and find interesting moments within it."

Despite being sourced and shipped in from the US, AHEC's European director David Venables said the maple remains carbon negative, according to independent lifecycle assessment studies.

"The carbon stored in the wood during growth is much greater than all the emissions associated with harvesting, processing and transport," he explained. This is thanks to the fact that it is derived from a "large, expanding and sustainably managed forest resource".

London's Heatherwick Studio was among the other designers recruited for the Connected project, contributing a modular system of table legs that double up as planters.

Mexican architect Enrique Tovar has also designed an unusual desk in light of the coronavirus pandemic, which features folding legs so that it can be carried and set up outside.