Abraham Thomas, former director of the Sir John Soane's Museum, has been named curator of architecture and design at The Metropolitan Museum of Art in New York.

Thomas said he was "thrilled and honored" to join The Met as Thomas in the newly created role, Daniel Brodsky Curator of Modern Architecture, Design, and Decorative Arts.

The role is an expansion of the position of Daniel Brodsky Associate Curator of Architecture and Design, which was first created in 2014 and held by British curator Beatrice Galilee.

The position follows a number of architecture and design curatorial roles Thomas has held at institutions in the US and UK – including the Smithsonian Institution, Sir John Soane's Museum and the V&A.

"He brings with him vast and varied experience and expertise, as well as a proven enthusiastic embrace of collaboration using an innovative approach," said The Met director Max Hollein.

"Abraham will be a driving force for our rethinking of how we best present, contextualise and collect the intersections, commonalities, and joint ambitions of art, architecture and design."

In his new role, Thomas will be "re-envisioning a powerful programme" that responds to current global events, according to department chairman Sheena Wagstaff.

"Abraham joins the Department of Modern and Contemporary Art at a critical moment, as we develop vital new narratives around architecture and design – especially those that engage with a global context in dialogue with historical examples – drawing upon collections at The Met that are unparalleled in their scope and depth," she said. 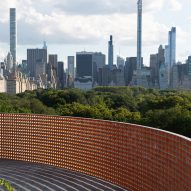 "We are eager to set to work re-envisioning a powerful programme that fully integrates architecture and design into our display of the arts of the 20th and 21st century, using these practices as starting points for a new approach."

Thomas most recently worked at the Smithsonian Institution serving as its senior curator at the Arts & Industries Building in Washington DC, following a stint as a curator of the institute's Renwick Gallery American art museum.

Thomas was curator of designs at V&A

As director of the Sir John Soane's Museum – a London museum that was once the home of neoclassical architect John Soane in the 19th century – from 2013 to 2015 Thomas oversaw a redesign of the interiors. He also initiated programmes with educational institutions including MIT's School of Architecture and Planning, The Architectural Association, London School of Economics and the School of Art, Architecture and Design at London Metropolitan University.

Thomas was curator of designs at the Victoria and Albert Museum from 2005 to 2013, overseeing its Architecture Gallery and partnership with the Royal Institute of British Architects. Heatherwick Studio: Designing the Extraordinary and 1:1 - Architects Build Small Spaces were among the exhibitions he curated during his time there.

He also co-curated Superstructures: The New Architecture, 1960–1990 in 2018 for the Sainsbury Centre for Visual Arts in the UK, which is regarded as one of the first exhibitions to thoroughly explore High-tech architecture.

In addition, he has published works and lectured on architecture, decorative arts, craft, graphic design and photography.

Portrait of Abraham Thomas is courtesy of The Met.