Bright red roofs stand out in the setting of this house in Malalcahuello, Chile, which Santiago firm Guillermo Acuña Arquitectos Asociados has built from CNC-cut wood.

Casa Malalcahuello has an impressive natural setting that includes a mountainous backdrop, the Malalcahuello National Reserve and Lonquimay Volcano to its north, and the nearby Conguillo National Park and Cautín River to the south.

GAAA divided Casa Malalcahuello into two offset gabled volumes – similar to the layout of a rural house the studio completed by the ocean in Chile. Casa Malalcahuell's volumes are raised above a sloped site by a plinth and arranged so as to offer different vistas from various points inside the house.

"The superior volumes are oriented towards the forest and volcano," said GAAA. "The common areas are protected by the heavy roof and enjoy a panoramic view to observe one of the most incredible landscapes of Chile."

Each volume has two pitched roofs with a smaller one laid on top of the larger one to create extra height to the interior of the house.

Casa Malalcahuello's roofing is made from Instapanel PV6, ridged panels produced by Chilean company Citanc from a material it describes as Zincalum, which is a sheet of steel protected by alloys of aluminium and zinc.

The panels are pre-painted a bold red to stand out in the snowfall, as shown in these photos by Cristóbal Palma.

GAAA said the project was the first in which it used a CNC (Computer Numerical Control) mechanisation to cut the wood for the structure. The design process involved first modelling the house in 3D before sending the initial design to Timber, a company in Temuco, South of Chile that undertook the CNC cutting of the wood.

Timber sourced the necessary amount of wood locally and choosing joins for construction, with GAAA adapting the design along the way.

"We send the model back and forth between our office and Timber, to make the proposal as efficient as possible in terms of the wood used and the joints," the studio explained.

Wood is then cut, labelled and transported to the site where carpenters follow an instruction sheet to assemble the house. GAAA said the process offered them more control in the materials used, and significantly reduced construction cost and time.

"It was an experience which has led us to entirely rethink the way we undertake the design process and made us to look to traditional carpentry for new possibilities." 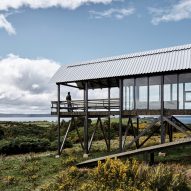 "All these have a positive impact when approaching a project in a remote location, where due to snows in the winter, the window of construction time is limited to only eight months," it added.

Wood is left exposed throughout the interiors of Casa Malalcahuello, which includes a large open-plan kitchen and living room on the lower level.  There is a fire with a conical-shaped chimney, partially clad in stones, that reaches the height of the gabled roof in one of the volumes.

The floor above is designed with a number of voids to keep the lower level light and airy.

A black spiral staircase leads to upper level composed of the bedrooms. Large windows offer expansive views of the surroundings with glass doors that open onto wood balconies.

Other houses in the nearby area include Prism House + Terrace by Smiljan Radić, which comprises two angular black volumes raised above a sloped terrain near to Conguillío National Park on a stilted, wooden deck.

GAAA was founded by architect Guillermo Acuña in Lo Barnechea. Acuña also designed himself a retreat just off the Chiloe archipelago's Rilan Bay in the south of Chile. Called Isla Lebe, the project involved renovating an old boathouse and adding a wide wooden stair to the front.