Contemporary design gallery Carwan Gallery has moved from Beirut to Athens, where it has opened with an exhibition of work by Omer Arbel.

Nicolas Bellavance-Lecompte, co-founder of Carwan Gallery, said he made the move due to Athens' emergence as a creative hub.

"I lived in Berlin in the early 2000s and the vibe was quite similar to what is happening in Athens now," he told Dezeen, saying the Greek capital's thriving art scene made it "the new Berlin".

"The low prices of real estate is a factor that facilitates the settlement of artists and designers but it also became a very interesting place for creativity."

"We all thought Lisbon was going to be the new Berlin but in the end it became more of a fiscal heaven destination as opposed to Athens, which has attracted artists, architects looking for a second home and many people just looking for a great quality of life."

"It's almost like if the city was sleeping for 10 years during the [financial] crisis and is now ready to bloom again," added Bellavance-Lecompte, who is also founder of the travelling Nomad design fair.

Carwan Gallery was founded in 2010 in Beirut and claimed to be the first contemporary design gallery in the Middle East.

Bellavance-Lecompte said he decided to move from the Lebanese capital a year ago, long before the devastating explosion that destroyed much of the city. 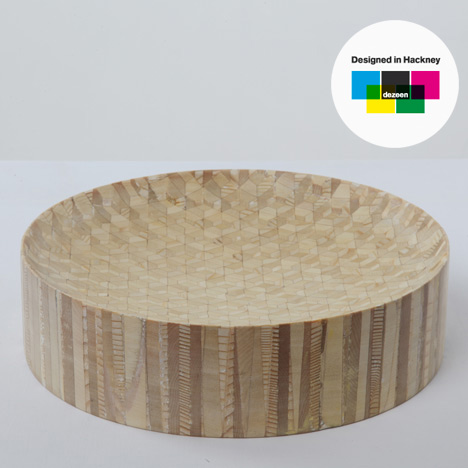 Extrusion by Philippe Malouin for Carwan Gallery at Ventura Lambrate

"The persistent economical crisis in Lebanon forced us to look for a safer zone and facilitate operations within the EU," he said.

"Athens is interesting, being close enough to still be part of the Near East."

Carwan Gallery's new location is in Piraeus, the port district of Athens, which "has a unique energy that strongly resembles Beirut," according to Bellavance-Lecompte.

The gallery occupies a brick-and-stone former warehouse built in the late 1800s, which Bellavance-Lecompte converted with architect Quentin Moyse.

It opened on 4 September with 113, an exhibition of 70 unique copper objects by Vancouver designer Omer Arbel.

Arbel created the objects by pouring a copper alloy into a just-blown glass vessel. The differing rates at which the metal and the glass cool and contract cause the glass to shatter, leaving a metal form with an iridescent finish on the side that was in contact with the glass and a rough, oxidised finish on the other side due to its contact with oxygen in the air.

113 by Omer Arbel is at Carwan Gallery, Polidefkous 39, Athens until 7 November. See Dezeen Events Guide for details of more architecture and design events.

Photography is by Giorgos Sfakianakis.