Architecture studio Neiheiser Argyros has completed the renovation of a 40-year-old office building in Athens, transforming its concrete structure with a cluster of playful forms and colourful interiors.

The Art 1 Office was created by completely stripping the original building back to its core, reorienting its interior and creating larger openings that take better advantage of its location next to a park in the northern suburbs of Athens.

In order to expand the interior space, a series of new forms were added around the building, creating the external appearance of a cluster of different buildings.

"What used to be a confusing and run-down muddle of geometric clashes is now untangled and re-articulated as if the building is composed of twelve separate buildings, each with its own cladding logic and interior atmosphere," explained the practice.

At the front, the building is more austere, finished in tones of grey and defined by large cast terrazzo steps and a reflective glass curtain wall used to clad its tallest form.

Two new geometric forms at either side of the entrance, finished in black metal and grey bricks, provide terraces and sheltered workspaces on their roofs, while atop the main building colourful seating and planting are shaded by a circular pergola.

At the rear, where it faces onto the park, the building appears more varied with a terrace-like arrangement of tall, thin extensions finished in pink, blue and grey and featuring large windows.

Inside, the building's original black marble floor has been retained, and the ceilings stripped back to reveal their rough, irregular concrete formwork. 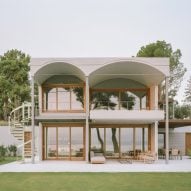 Echoing the colourful additions to the outside, new custom furniture and fittings such as a bright red metal bookcase partition, criss-crossing hotdesk tables and colourful tilework contrasts the roughness of the existing interior.

On the ground floor, a new staircase in pinkish-red terrazzo with a bright red balustrade leads up to a bright mezzanine and doubles as a seating area for events or discussions.

"Splashes of colour are distributed throughout the building, both indoors and outdoors," said the practice.

"This combination of refined and rough materials creates a balance and a common DNA across all floors, letting the custom furniture on each level create its unique identity," it continued.

Neiheiser Argyros was founded in 2015 by Ryan Neiheiser and Xristina Argyros and has offices in London and Athens. It designed the Art 1 Office for developer Hellenic Properties.

Renovations have featured prominently in the recent work of the practice, which has included the transformation of two Modernist villas near Athens, one with an arched concrete roof and the other defined by its concrete grid structure.

Elsewhere in Athens, Georges Batzios Architects renovated a brutalist office by restoring its concrete shell and reorganising its interiors.

The photography is by Lorenzo Zandri unless stated otherwise.