Architecture firm Snøhetta has been announced as the winner of a competition to design the Theodore Roosevelt Presidential Library in Medora, North Dakota.

The New York- and Oslo-based firm was chosen from a shortlist containing US firm Studio Gang and Danish studio Henning Larsen to design the library.

Snøhetta's winning design is topped with a huge curved roof designed to act as an extension of the site in North Dakota city Medora, which is surrounded by Badlands, abuts Theodore Roosevelt National Park and has views of the Elkhorn Ranch.

Designed for the northeast edge of the butte, the building will be linked to a curved pathway that will lead visitors around the site, connecting to the Maah Daah Hey Trail and additional pavilions.

"When designing a new project, we think about how we can more give to the site or community more than is initially asked of us," said Craig Dykers. "We integrated the Theodore Roosevelt Presidential Library into the landscape of the North Dakota Badlands."

According to Snøhetta, the building will be built with "natural and renewable" materials and use energy systems that will set a "new standard for sustainable design in the region".

Snøhetta was commended for drawing on, and highlighting, the rough terrain of the Badlands, as well as considering the conservation policies Roosevelt worked on while serving as president of the United States from 1901 to 1909.

The project is also intended to extend beyond its site, including connections to Little Missouri River, a former military camp called the Cantonment, and the original train depot in where Roosevelt first arrived in the area. There would also be a parking option near these external sites for visitors to catch an electric caravan to the site. 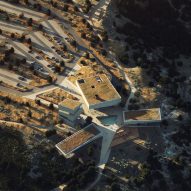 Studio Gang, Henning Larsen and Snøhetta were shortlisted for the project from 12 practices that applied to the Request for Qualifications (RFQ) that the Theodore Roosevelt Presidential Library Foundation made public in April to find a suitable architect for the project. The firm intends to continue to develop the design.

"We still have much to learn about President Roosevelt, and we're looking forward to working with the Medora community and the broader project team to translate this knowledge into an immersive place to learn about TR's life and legacy," Dykers added.

Once completed it will join the 13 presidential libraries in the US that serve as archives and museums illustrating the life and work of each president since Herbert Hoover, who was in office from 1929-1933.

They were each built in their president's home state, with the most recent library completed for George W Bush in Dallas, Texas.

Architects Tod Williams and Billie Tsien are designing the 14th presidential library for Barack Obama, who ended his term in 2017. They were selected for the project in June 2016 from a list that included Snøhetta, Renzo Piano and David Adjaye.

Called the Barack Obama Presidential Center, the project has encountered controversy because of its siting in the historic Jackson Park, which was designed in 1871 by Frederick Law Olmsted and Calvert Vaux.