Patterns created by Turkish media artist Refik Anadol are being projected onto the facades of Frank Gehry's Walt Disney Concert Hall in Los Angeles each night for a limited time.

The temporary Walt Disney Concert Hall Dreams light show was developed by the LA-based artist to celebrate the centenary of the Los Angeles Philharmonic, which currently resides in the Gehry-designed building in the city's Downtown area.

Displayed every half hour during the evening, the projections include text, photos and patterns generated using artificial intelligence (AI) and the orchestra's digital archive.

Anadol worked with the Artists and Machine Intelligence programme at Google Arts and Culture to create the series. It involved machine intelligence to parse the philharmonic's archival material – comprising 587,763 image, 1,880 video, 1,483 metadata, and 17,773 audio files – and turn it into data points.

These were then categorised by hundreds of attributes, and reshuffled. The Los Angeles Philharmonic likened the resulting series to the rearranged "memories" of a human dream. 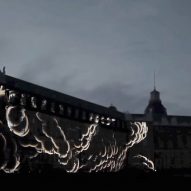 "To make Walt Disney Concert Hall 'dream', Anadol utilised a creative, computerised 'mind' to mimic how humans dream – by processing memories to form a new combination of images and ideas," the organisation said in a statement.

"This 'data universe' is Anadol's material, and machine intelligence is his artistic collaborator."

This imagery is displayed on the Walt Disney Concert Hall's exterior by 42 large-scale projectors, which were installed around the perimeter to face all of the buildings curvaceous stainless steel volumes.

Patterned designs add colour and texture across the metallic structure, while in some instances, its individual blocks act as canvases for massive poster art or streams of photographs.

To accompany the light show, a soundtrack was adapted from the philharmonic's archival recordings by sound designers Parag K Mital, Robert Thomas and Kerim Karaoglu.

Completed in 2003, the Walt Disney Concert Hall is one of Gehry's most well-known projects and demonstrates the extravagant forms that have become synonymous with his style. Other examples include the Guggenheim Museum Bilbao.

The LA-based architect, 89, was enlisted in the late 1980s to designed the music centre at 111 South Grand Avenue in Downtown Los Angeles at the request of Lillian Disney – the widow of American animator Walt Disney. She donated $50 million (£38.5 million) to fund the project in her husband's memory.

Construction began in 1991 and was completed over 10 years later.

The Los Angeles Philharmonic moved in when it opened and uses it annually for its winter season, running each year from October to June. The orchestra relocates to the city's Hollywood Bowl for the summer months, from July to September.

Established in 1919, the LA Phil will officially celebrate its centenary next year. Walt Disney Concert Hall Dreams kickstarted the series of anniversary events on 28 September 2018 , and will run until 6 October 2018. Performances take place daily at half hour intervals from 7.30pm to 11.30pm.

Photography is by Dustin Downing. Video is by Refik Anadol Studio.