The University of Stuttgart has designed SkinOver Reed, a thatched hut in the Austrian Alps, as part of its research into renewable materials that can be used in high-altitude Alpine regions.

A team from the university's institute for building materials (IBBTE) developed the hut, which has been shortlisted in the small building category for Dezeen Awards 2020, for the German Alpine Club (DAV) as an experiment to test the capabilities of thatch as an alternative building material to typical Alpine structures.

"We found out that building skins in Alpine architecture are either stone, concrete, metal or wood," architect and lecturer Anke Wollbrink told Dezeen.

"DAV asked us if we could research or imagine an alternative, renewable material to meet their standards and especially their climate goals."

It built the hut in Vorarlberg, Austria in August 2019, after two years of research and project development, on top of an existing stone foundation.

"We rediscovered the material thatch, which allows for a very three-dimensional design, almost analogue to concrete," Wollbrink said.

"This fascinated us right away and led to further research and the idea of building a prototype thatched envelope. We also researched contemporary thatch architecture and found beautiful strong examples in France, Denmark and Sweden."

Reed was used for both the facade and roof cladding of the SkinOver Reed hut in Vorarlberg, Austria, creating a monolithic design that was built by craftsmen and students working together.

The IBBTE team chose to work with thatch, as it is a traditional and environmentally-friendly way of building houses that uses reeds to waterproof and insulate roofs. 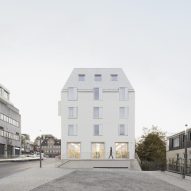 "It is a sustainable, renewable, carbon-neutral resource and seems to be a perfect alternative renewable material for the building envelope: rapid growth, short process chain with low energy demand and emissions, perfect life cycle, no pollutants, and proved over generations," Wollbrink said.

"At the end of life reed is compostable and closes the material life cycle."

The hut is used to supply water to the nearby Mannheimer Hut, a restaurant and rest stop for hikers, and the IBBTE team is recoding how the material copes with the harsh local conditions.

"Weather conditions on 2,600 metres altitude are challenging, and the small building has been covered with snow for about nine months, but generally the material looked good after the first winter," Wollbrink said.

"In the long term, we plan periodic and permanent measurements to gain more knowledge of appropriateness and ageing."

Other recent architectural projects in the Alps include Network of Architecture's Ötzi Peak 3251 viewing platform and Studio Seilern Architects' restaurant perched on the top of Mount Gütsch.