Architecture practice Gartnerfuglen Arkitekter and architect Mariana de Delás have hidden a hut next to a secluded lake in Norway with a layer of birch branches.

Gjemmested, meaning hideout in English, sits at the bottom of a steep slope in the Telemark region, and is accessible only by rowing boat or by skis when the lake is frozen over.

The hut was designed to be a place to retreat and disconnect from any technological distractions, a place where the occupants can fish and nap in peace.

"When not in use, the hideout sits quietly and modestly in nature as if it were one of its creatures; blending in with the forest behind and even serving as a pitstop for thirsty birds on their way to the lake," explained the studio.

The family who own the land the Gjemmested is built on live on a secluded farm on the other side of the lake.

They have gradually seen the surrounding area be discovered and used by more and more people, due to the public right of access laws in Norway – called Allemannsretten.

While not wanting to prevent this access, the owners sought to create a space that evoked the isolated, secluded feeling of the forest. The fishing hut has no internet or mobile phone connection.

"Elements that could be considered inconvenient in the past are more and more becoming luxurious nowadays," said Gartnerfuglen.

Gartnerfuglen Arkitekter and Mariana de Delás dug the scree out by hand and used the rocks to create a pier for the owners to dock their rowboat at. The hut is made from a skeleton of timber.

The birch branch thatch provides a layer of insulation against snowy winters and and helps camouflage the hut.

Bright red windows and a door provide a splash of colour to the shaggy exterior of the fairytale hut. 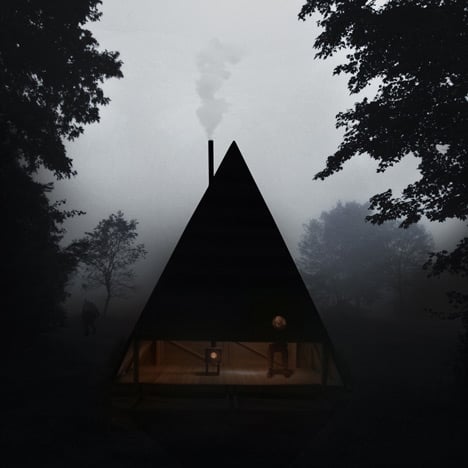 The hide's interior contrasts its rough and textured exterior, with plain white wooden walls accented by the large red surrounds of the window and door.

One small room has a built-in desk looking out through a large window to the lake.

A set of steps leads up to a second room large enough for two people to lie down, which is illuminated by a high skylight.

Gartnerfuglen Arkitekter and Mariana de Delás have previously collaborated on another, equally nature-focused project in Mallorca, where they designed a raised wooden platform for an equestrian to use for grooming.