Designer Iñaki Alday and landscape architect Kate Orff reflected on how their practices respond to the climate crisis in this live conversation produced by Dezeen for Exhibit Columbus.

The discussion, called New Middles: Resiliency and Climate Adaptation, was the second instalment in a series of talks broadcast on Dezeen as part of Exhibit Columbus' New Middles symposium.

Running throughout September and October, the symposium focuses on the designed future of mid-sized cities situated within the Mississippi Watershed – a central US region defined by the Mississippi River's drainage basin.

"This conversation stems from the question: how is the Mississippi Watershed and the plains ecosystems and habitat impacted by the changing climate?" said the curators.

Moderated by Exhibit Columbus curator Iker Gil, the discussion examined how landscape design can help cities adapt to public health crises such as the coronavirus pandemic.

Gil is a Chicago-based architect, editor and curator. He is the director of MAS Studio, a collaborative architecture and design firm, as well as the founder and editor-in-chief of the studio's eponymous design journal MAS Context.

Alongside his design practice, Gil also teaches architecture at the School of Art Institute of Chicago. Since 2019, he has been the executive director of the SOM Foundation, which seeks to advance the design profession's ability to address current key issues.

Iñaki Alday is the co-founder of Aldayjover Architecture and Landscape, a multidisciplinary research-based practice with offices in New Orleans and Barcelona, which he established in 1996 with Margarita Jover.

In 2018, Alday was appointed dean of Tulane School of Architecture in New Orleans. Before this, he was the chair of the University of Virginia's architecture department, where he has co-directed the Yamuna River Project since 2016.

The Yamuna River Project is an interdisciplinary research programme that aims to revitalise the Yamuna River in India and reconnect it with the city of New Delhi.

Kate Orff is the founder of US landscape architecture studio, Scape, which she set up in 2007.

She is also the director of Urban Design and co-director of the Centre for Resilient Cities and Landscapes at Columbia Graduate School of Architecture, Planning and Preservation. 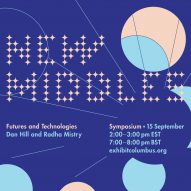 This conversation was produced by Dezeen in collaboration with Exhibit Columbus as part of its New Middles online symposium, which takes place from 15 September until 29 October 2020.

It followed the first talk in the series, called New Middles: Futures and Technologies, which explored the role of strategic foresight and storytelling in design.

The talk, which featured futurists Dan Hill and Radha Mistry in conversation with Dezeen's founder and editor-in-chief Marcus Fairs, looked at bringing mobility and manufacturing into the cities of the future.

Find out more about the symposium and view the schedule ›