After being left vacant for a year, the glazed brick structure is now home to the second location of local coffee chain Lucabe Coffee Company.

Dating back to 1961, the bank building is affectionately known by the community as the "dead horse," after its four crenellated towers which rise up like the limbs of a horse on its back.

When Weese originally designed the building, these towers were rather meant to evoke "a child's vision of a castle," according to a press release from the Landmark Columbus Foundation – a local nonprofit dedicated to preserving the city's architectural heritage.

Repurposing the building entailed a light-touch renovation, which was completed by owners Tyler and Alissa Hodge, alongside local architecture studio Daugherty Design Plus. "This was very much a DIY project done by the owners of Lucabe Coffee Company with help from others in the community," said a spokesperson for the project told Dezeen. "It was a uniquely 'Columbus' undertaking in that way."

The intervention focused on preserving the original features and highlighting them wherever possible. For instance, the bank's drive-through window still acts as a service counter for customers to pick up coffee from their cars.

Carpets and several layers of glue covering the interior floors were cleared out to reveal the original interlocked stone pattern the architect had intended.

"The inside of the building is inspired by the modern design of that era, featuring black, wood, and grey elements and a nod to the original interior with an open view to the vault," the Landmark Columbus Foundation explained. 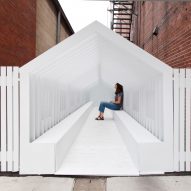 Lucabe Coffee Company has also made the most of the building's location overlooking the Haw Creek River, along which runs a trail popular with cyclists and joggers, to include exterior seating for its patrons.

The Landmark Columbus Foundation organises the Exhibit Columbus architecture festival, which this year coincides with the bank building's 60th anniversary.

This third iteration of the event, which spotlights the Midwest's contribution to American architecture, is themed New Middles: From Main Street To Megalopolis, What Is The Future Of The Middle City?

According to the city of Columbus, Harry Weese designed more buildings in the city than any other architect in the 1950s and 60s.

His others include an industrial compound for the Cummins engine corporation, and the First Baptist Church.

Other coffee shops in unique settings include a café inserted into an industrial building in China's Northern Hebei Province, and an all-blue coffee shop by Julia Jamrozik and Coryn Kempster.

The photography is by Hadley Fruits, provided courtesy of Landmark Columbus Foundation.