Architecture firm Snøhetta has unveiled its design for a children's museum in El Paso, Texas with a barrel-vaulted roof that almost resembles a drawing of a cloud.

The studio designed the roof of El Paso Children's Museum to have four segments, three of which are curved and one that is pitched.

Upside-down, arched windows extend from the peaks down tiled walls in the renderings, with one window sticking out from the gabled volume.

These openings are mirrored by other upright curved windows rising from the tall glazed walls running along the lower levels.

In addition to these, smaller, circular windows also puncture the greyed exterior.

Snøhetta, which is designing the 70,000-square-foot (6,500-square-metre) museum together with El Paso architects Exigo, has also added a number of outdoor exhibition spaces to make the most of the Texan city's sunny weather.

These include a large garden that is staggered in terraces, a space cut into the building's roof and a cooling-mist playground.

For these outdoor areas, Snøhetta intends to use local plants and natural boulders to reference the desert setting of El Paso.

The ground floor will host free exhibitions, a cafe and the entrance.

A 60-foot-tall (18-metre-tall) atrium that stretches up three floors from this level will house a climbing structure. Images show the interiors will be filled with similarly playful creations, made by exhibition designers Gyroscope, such as a huge hanging star, ribbed pavilions and metallic slides. 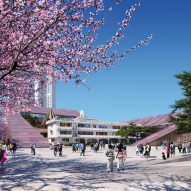 Snøhetta won a competition to design the El Paso Children's Museum in 2018. It will be located in the arts district of El Paso's Downtown area, near the US-Mexico border, and under one kilometre from border-crossing station El Paso del Norte.

With its proximity to Mexico in mind, the museum is designed for both Spanish and English, and includes an exhibit created with Museo La Rodadora, a children's museum just across the border in the city of Juarez.

Last year, architectural studio Rael San Fratello installed pink seesaws between the metal slats of the US-Mexico border wall so children in El Paso and Juarez could play together. The installation followed a string of controversies surrounding the Mexican border wall, a key commitment in president Trump's 2016 presidential campaign.